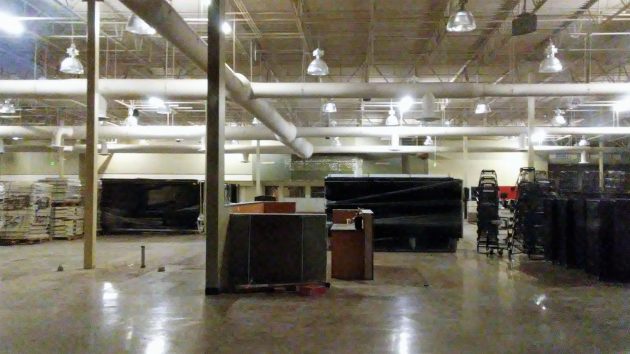 Equipment stored in the future grocery store looks like it’s awaiting some action.

The latest holdup in plans for a new supermarket and hardware store in North Albany seems to involve the city building permit. It’s been applied for but not yet approved.

According to the Albany building division’s website, an application for a building permit was received from Novak Architecture in Portland on June  28. It was for the renovation of the former Ray’s store in the North Albany Village shopping center for a new operator, the Myers Group based in Washington state. (For the background on all this, see previous stories here and here.)

The city valued the prospective renovations at $300,000 and collected a fee of $1,184.95. A note on the city’s online file says the applicant would also need to have a site plan reviewed and approved. No site plan has been filed.

When I asked about this last week, I was told the site plan would be needed only when the store operator started an outdoor garden center, and its lack so far was not holding up the building permit. But since the garden center has been part of the plan, presumably the site plan review will have to take place if the city insists.

What about the building permit for the remodeling? Building Inspector Joel Heenan told me by email on Tuesday the plans had been sent back to the applicant on July 18 “for corrections regarding the means of egress system in the new office area and other minor mechanical and refrigeration clarifications.” (I didn’t ask what an “egress system” was. Presumably an exit door.)

As of Tuesday, Heenan had not heard back from the applicant. “I’ll be getting in contact with them later this week if I still haven’t heard anything,” he wrote.

Since this is August and the remodeling has yet to start, it seems unlikely that the new market can open in September, which was the most recent target date. As for an updated target date for the opening, my contact at the Myers Group has not given me a response. (hh)