N. Albany shoppers: The wait is over 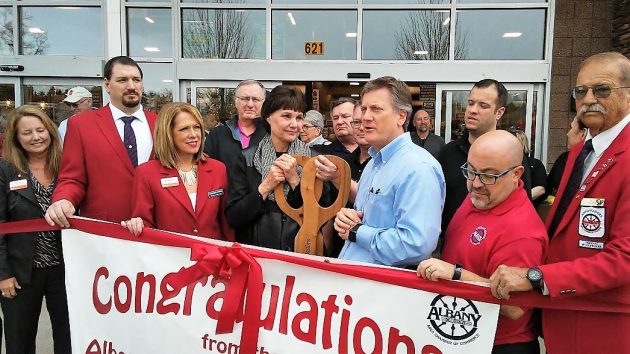 Surrounded by Chamber of Commerce ambassadors, Mayor Sharon Konopa and Tyler Myers, in the blue shirt, get ready to open the new North Albany Supermarket Tuesday.

North Albany’s long wait for a supermarket is over. Now customers can demonstrate that opening the North Albany IGA Supermarket and Hero ACE hardware store was the right move.

The store opens for shopping at 6 Wednesday morning. It will be open from 6 a.m. to 10 p.m. seven days a week.

About 200 people got a preview Tuesday afternoon, wandering around the aisles, meeting some of the staff, and sampling all kinds of appetizers. Mayor Sharon Konopa cut the obligatory ribbon along with Tyler Myers, president of The Myers Group. That’s the company, based in Clinton, Wash., that is running the store, one of a chain of groceries and other businesses around the Northwest.

The store building in the North Albany Village shopping center had been empty since Ray’s Food Store left some five years ago.

The former downtown Albany liquor store, whose state license was transferred to The Myers Group last year, has moved into what had been a community meeting room in the back of the supermarket. In the front, a restaurant-like seating area near the deli and coffee counter has been equipped with more tables.

The company intends to build an outdoor greenhouse on the store’s west side, where the hardware section is. Myers told me that though it’s been described as a greenhouse, it’s really more like a building complete with fire sprinklers and a reinforced foundation. It has not been started because the company is still waiting for its city permits, which Myers expects to receive soon.

It was back in January 2017 that Myers had confirmed to me that his company intended to open the North Albany store. What with preparing designs, undergoing city reviews, and the extensive job of remodeling, to get to the opening now has taken nearly a year longer than he hoped back then. Now it’s up to the countless people who had been clamoring for a North Albany grocery to make the market go. (hh) 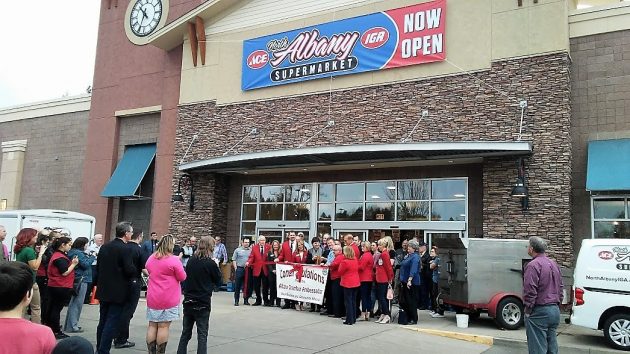 A temporary sign hangs over the opening ceremony at the long-awaited North Albany market.


10 responses to “N. Albany shoppers: The wait is over”