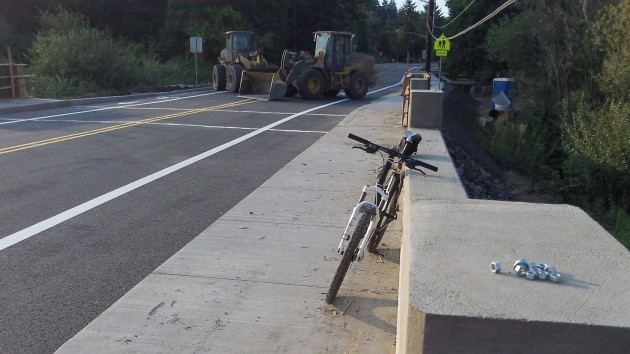 Looks like some nuts await completion of new bridge railings.

Here’s some local-local news of interest to North Albany commuters: With any kind of luck, North Albany Road might be open to through traffic by the time you drive home Tuesday.

(That’s what I wrote Monday night. And this Tuesday afternoon, the road indeed has been opened, to the delight of drivers using it, me included.)

Staci Belcastro of the Albany Public Works Department updated the city council on this road Monday. When I asked her later, she said she understood the road could be reopened by mid-morning Tuesday, or as soon as new traffic signal is activated.

I toured the new pavement on my bike Monday night, squeezing past the two pieces of heavy equipment left in place to prevent motorists from doing the same. As you would expect from brand-new asphalt, it looks good.

North Albany Road was closed to through traffic on June 12 so it and the bridge across Thornton Lakes could be rebuilt and widened. The city at the time hoped to reopen it by the Friday before Labor Day. If the road does open Tuesday, Emery & Sons Construction Co. and its subs will have managed to beat that deadline by a week and three days.

Emery had the roughly $6.6 million contract to reconstruct 3,000 feet of the road and install a water main nearby. Adjacent to the driving lanes, work remains to be finished on the sidewalks and other details.

Over on Spring Hill, a roundabout at Quarry Road, improvised to handle detour traffic, will stay, the city council and Benton County commissioners agreed at a joint meeting last week. Benton Public Works originally said the feature was too small to function well, and it clearly is, as drivers have discovered. Now county officials say they’ll eventually try to acquire enough property to make it into a proper roundabout.

The council said the roundabout — actually an oval — served to slow southbound traffic for the benefit of neighbors along Spring Hill, and that’s what the city wants. (hh) 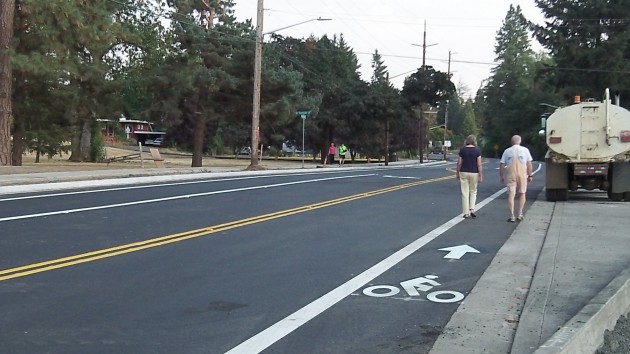