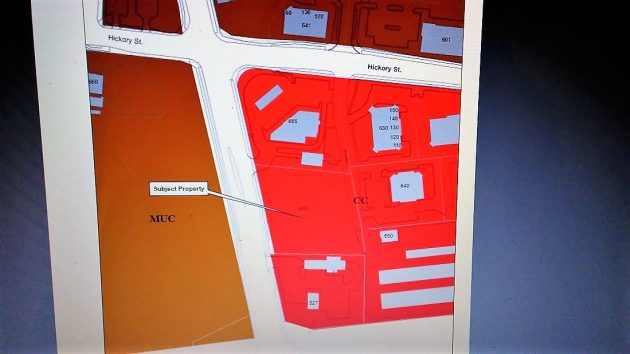 The arrow on this planning department sketch points to where the medical office building will go.

One is the site plan for the outdoor garden center of the Ace hardware store that’s supposed to take up about one-third of the interior space of the planned Myers grocery in the North Albany Village shopping center. I reported on Nov. 13 that the site plan had been filed. Now the application is complete and is being reviewed.

When it’s approved by the planning staff, in a matter of weeks, perhaps The Myers Group, based in Clinton, Wash., will get going on preparing the long-awaited grocery store, which besides the hardware store and garden center will have a liquor store as well.

The other plan under city review calls for a two-story medical office building at 633 North Albany Road, sandwiched between two car washes on the east side of the street. Apparently that section of North Albany needs another medical building, in addition to the several already there. (Samaritan Health has two off Hickory Street and was planning a third, and there’s also the Corvallis Clinic and the Fresenius Dialysis center.)

The site of the planned medical building is owned by a Medford-based LLC whose principals previously rebuilt a former hospital in Roseburg for state offices. The architect of the Albany project is TvA of Portland. The plan includes a parking lot with 66 spaces plus four covered spaces for bikes.

Property owners within 300 feet of both projects have been sent notices. The deadline for comments is Dec. 13. Both the greenhouse and the medical offices are allowed uses under the zoning code, so approval of the plans — to see they comply with various requirements — is up to the planning staff. (hh)

A drawing of the outdoor garden center on the west side of the planned Myers grocery and Ace hardware store.