My corona rides: Here’s another scene 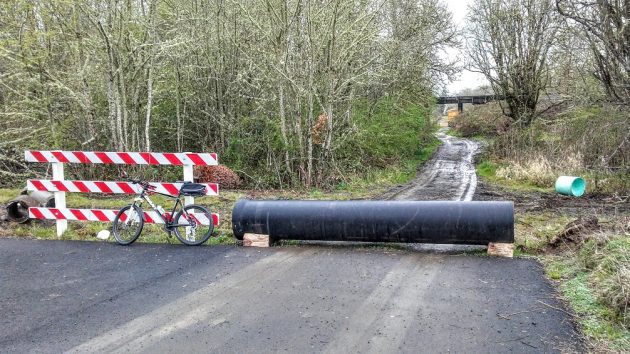 As a barrier this looks pretty effective. A gate,though, might be easier to open.

Self-isolating on the bike on Albany’s empty streets during these Days of Corona, you pretty soon run out of notable things to see and photograph. But then you come across this, and the message is: “Stay Out.”

This is just before 13th Avenue ducks under the old Oregon Electric Railroad line near the western city limits. Up to this point, the street was improved for the construction of houses in the Takena Estates subdivision. (Two houses have been finished there, and the third is just being started.)

The railroad track, of course, is used by the Portland & Western. About a quarter-mile beyond the underpass and the rail line, there’s the Calapooia River, which forms the Albany city limit in that area.

It’s not clear from the city’s online map whether the public street, 13th Avenue, extends to the track or beyond, or whether it ends where that length of pipe blocks the road.

What’s on the other side of the railroad, according to county property records and Google Maps, is a big filbert orchard owned by Riverbend Hazelnut Farm LLC.

The tire tracks on the pavement say that now and then a truck goes through there. One hopes that the pipe, despite its size and weight, is not all that difficult to move. (hh)

3 responses to “My corona rides: Here’s another scene”