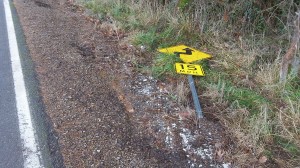 A road sign was, we hope, the only victim of this “road departure” on Bryant Drive.

On Dec. 22, a 16-year-old driver from Brownsville lost her life when her vehicle crossed the center line in a right-hand curve on Highway 228 in Linn County and collided with the front end of a tow truck coming the other way. It was what the Oregon State Police called a “road departure crash,” the kind we always worry about, especially when we’re on one of Oregon’s winding two-lanes.

Every time we approach a curve, especially a right-hand curve around a hill where we can’t see the other end, we fervently hope that oncoming drivers stay on their side of the center line. And when we’re coming to a left-hand curve, we likewise expect that drivers heading our way are not going too fast or otherwise fail to make the turn.

The state police say that any time a collision results from a vehicle crossing the center line or going off the road on the other side, that’s a “road departure crash.” And in a press release about the Dec. 22 accident on 228, the OSP said that type of collision accounts for 66 percent of traffic deaths in Oregon.

Even without statistics like that, or the untimely deaths of particular people named in the news, we must remember — all the time — that in driving there’s nothing as crucial as staying on the right side of the road. (hh)