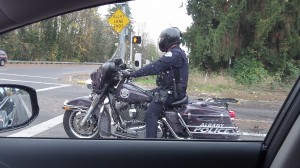 Waiting at the Highway 20 signal on North Albany Road.

Is the Albany Police Department reviving its motorcycle patrols? That’s what I wondered on Friday when I was driving into town and followed a cop on a motorbike on North Albany Road. But, alas, it isn’t so.

Capt. Jeff Hinrichs tells me that the department has no motorcycle officers. The department does have an older model Harley, donated by the former local Harley-Davidson dealer, that it uses for special events, and that’s what I saw that afternoon. “We were just making sure it was ready for the (Veterans Day) parade on Monday since it does not get ridden a lot,” Hinrichs says in an email. “We were not patrolling with it.”

For a few years during the tenure of Chief Pat Merina, the Albany department did have motorcycle patrols. There was a brief flap about the machines not being of an American make. But the program was discontinued, if memory serves, after Merina retired in 2000. There’s no practical reason to revive it now, even though for the officers who had that job, riding around town on a motorbike should have been great duty — on sunny days. (hh)