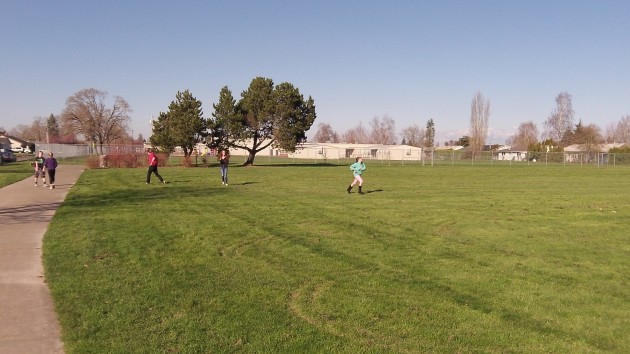 Unaware of any “wetland,” children cavort at he north end of Sunrise Park on Saturday.

Somebody ought to add up all the public money that has been wasted over the years on studying or “mitigating” phony wetlands, that is, lands that are neither wet nor serve any of the functions of true wetlands. I’m thinking of this because in Albany now, we have yet another case.

As a way to prop up the neighborhood around it, the city wants to make improvements at the north end of Sunrise Park. The plan is to build a new playground, shelter, parking lot, picnic tables and “other amenities.” Not so fast, though.

“Regretfully,” Parks Director Ed Hodney tells the Human Relations Commission in a Feb. 19 memo, “we have been informed that the construction zone is covered with state-regulated wetlands, delaying the completion of design until the scope of the wetlands can be confirmed and potential construction impacts determined. A wetlands expert has been hired and will complete his assessment by mid-March…. Application will then be made to the State Department of Lands to determine any mitigation requirements before proceeding with the project.”

Sunrise Park is as flat as a table and is covered with grass that is regularly mowed. No cattails swaying in the breeze, no frogs frolicking in a swamp. There is no swamp. Not even a puddle is to be seen. And yet there is a “state-protected wetland”? Probably, because under the color of a misguided state law, the wetlands designators and regulators have gone nuts.

Doing this just to annoy citizens would be bad enough. But it costs money. That “wetlands expert” the parks department has hired does not work for nothing. (I’ll find out Monday what he’s getting.) If he finds something that needs “mitigating,” the city may have to pay a so-called wetlands bank, which maintains wetlands somewhere else.

The very idea of “mitigation” is insane because a real wetland’s importance — as wildlife habitat and a sponge to help absorb winter floods — depends on its specific location. Having a moist meadow somewhere else does not make up for the loss of any piece of real wetland.

But this nonsense is now routine. Some years ago Albany paid $75,000 to a wetlands bank that had set aside space for the Gatorade project that did not pan out. Then it spent another $30,000 on a new wetlands study in case the city wanted to extend 53rd Avenue eastward. The previous study had expired, as though real wetlands had a sell-by date, and the new one is likely to expire too before it is ever needed.

Just now, a state contractor is installing a crash barrier on the side of the I-5 median instead of in the middle because ODOT has to avoid alleged wetlands. And Linn County is about to spend an extra million dollars or so on widening three miles of Riverside Drive, and part of the extra expense is for “wetland delineation and mitigation.”

Years ago, President Bush the elder committed the country to “no net loss of wetlands.” That sounded good because everybody thought he was talking about watery places where ducks or tadpoles thrive. We were mistaken. Now we pay extra to delineate and mitigate the grass in Sunrise Park. (hh)