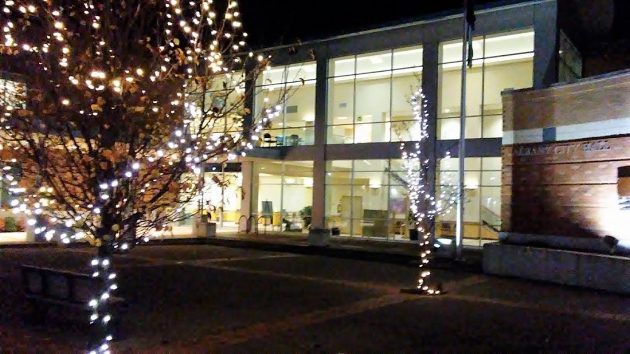 The festive look outdoors notwithstanding, inside City Hall there was talk Wednesday of raising money for something as mundane as street maintenance.

The Albany City Council has not forgotten about street repairs. Once again on Wednesday the members talked about ways of getting people to pay more so streets could be properly maintained.

So far it’s still just talk. But, likely as not, in the coming weeks a majority of four on the seven-member council may settle on one or more potential sources of additional cash and try, if required, to get voters to agree.

What about the money they have, you may ask. The plain fact is that it’s not enough, even with additional gas tax revenue coming from the state’s rising gas tax approved by the legislature this year. Public Works has told the council the city needs a one-time shot of $20 million to catch up with street maintenance needs, plus about $3.4 million annually for ongoing work.

The options the council is weighing are collecting a “street utility tax” like the storm water or rain tax that took effect this year; or raising the said rain tax; or bumping up the city surcharge on sewer and water rates from 5 to 7 percent; or getting voters to approve a general obligation bond issue; or forming various “local improvement districts” that would impose assessments on affected properties; or having voters pass a local gas tax; or a combination of some or all of the above.

The council members have been mulling these choices for a while. One new idea Wednesday came from Councilman Ray Kopczynski. Why not use urban renewal dollars borrowed by the Central Albany Revitalization Area to repave residential streets within the CARA district that need it? (CARA already is funding the $8.5 million project to redo and beautify about two dozen blocks of commercial streets downtown.)

Mayor Sharon Konopa, though, wants to try for a gas tax first. She suggested an election as part of the May primary because a November election would be crowded with other issues. But Councilor Bill Coburn thought May 2018 would not leave nearly enough time to prepare for an election.

No decisions were made on Wednesday, except that it would be a good idea to start an “outreach” effort to let the public know about the need for more money for streets. (hh)