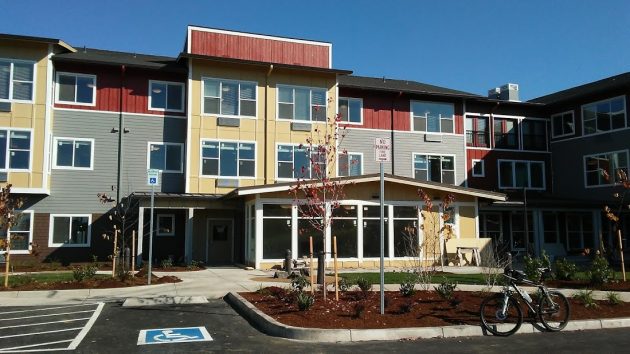 The front entrance of Waverly Assisted Living on Oct. 27.

Looks like Albany’s latest accommodation for the aged is getting ready to open.  Waverly Assisted Living and Memory Care, at 2853 Salem Ave. S.E., is on one of my bike routes, and I’ve watched its construction for about a year and a half.

The three-story building run by Ridgeline Management Co. has 70 beds for assisted living and 21 for memory care, according to its website.

When I stopped there on Oct. 27 to take the picture you see here, the landscaping was finished and the outside looked as though it could be ready for residents at any time. A banner on the outside said something about opening this fall, but the company’s website says the opening is anticipated early in 2018. (hh)