More middle housing? Apparently not yet 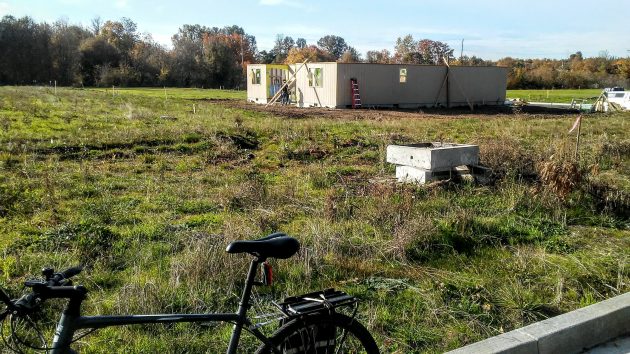 The first house being built in the Takena Estates subdivision as it looked on Monday, Oct. 14.

The 2019 Oregon legislature wanted more “middle housing” to be built in areas zoned for single families, but so far in Albany there’s no sign it’s getting its wish.

There is, for example, the Takena Estates subdivision on the western edge of Albany, approved by the planning commission in 2010, with streets and utilities installed in 2018. Now the first house is under construction, as I noticed on a bike ride Monday.

It’s a traditional single-family house, three bedrooms and two baths, with 1,934 square feet including the garage, according to the building permit taken out by the developer, Salem-based Empire Builders of Oregon.

The city permit, which cost $12,807 in fees to obtain, says the construction of that house is valued at about $193,000. Last time I checked the website of that subdivision, houses there were to be offered starting at $299,000.

The legislature gave cities a couple of years to enact new code language to provide for duplexes and other multi-family housing — so-called middle housing — in single-family zones, and that task hasn’t even started in Albany or anywhere else.

So the development of single-family subdivisions continues just as if House Bill 2001 had never been passed. (hh)


6 responses to “More middle housing? Apparently not yet”