More housing: Before the trees are cut

The development site at 840 Airport Road, as seen from Franklin Avenue on Jan. 8.

If they haven’t been already, most of the Oregon white oaks on this acreage off Airport Road in Albany’s Santiam Neighborhood will be felled to make room for a planned-unit development of 44 apartments and 11 single-family homes.

But some of the trees are to be saved, and orange plastic fencing marked them off or surrounded them last week.

The Albany Planning Commission approved the development on Aug. 3, 2020. In November, the city issued a conditional permit for tree removal. When I went past there on a bike ride last week, the trees were still standing, some of them were marked off with the orange fencing.

The plan approved by the city says the 6.4-acre site contained 329 trees bigger than 25 inches around, 309 of them Oregon white oaks. The developer planned to cut down 251 of the Oregon white oaks and preserve 58. The trees to be saved are mostly on the east side fronting Airport Road, and others are elsewhere on the site.

The tree-removal permit says it expires on May 18. So chances are that come spring, part of that wooded area off Franklin Avenue will be gone.

According to all the projections, Albany will need plenty of new housing in the next few years. The projections don’t say anything about how the wooded landscape of the city will change as a result. (hh) 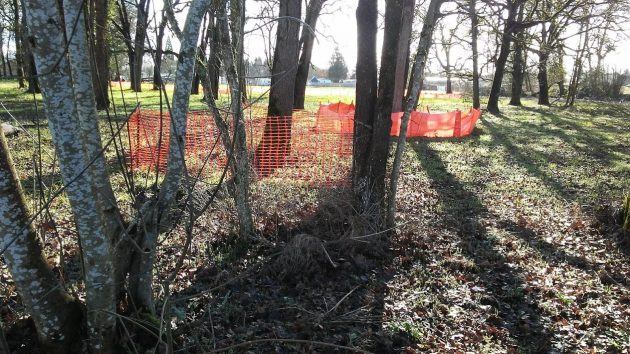 The view from Frankin Avenue on Jan. 8.

4 responses to “More housing: Before the trees are cut”