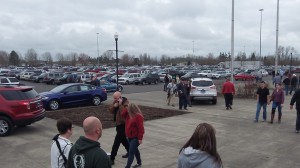 Outside an Albany gun show in March 2013.

Here’s something you may not have suspected until you read about in the papers or heard it on TV: The number of gun homicides in the United States has fallen sharply over the last 20 years even while the number of guns in civilian hands has grown.

From the public buzz lately, you would think that more widespread gun ownership is more dangerous and would be accompanied by more killings. So it was very useful for the nonpartisan Pew Research Center to set the record straight.

You can read the center’s full report online. You will find that an estimated 310 million firearms were available to American civilians in 2009. That’s one gun per person, double the rate of 1968, though no one knows how many households actually have access to a firearm.

The report is inconclusive about the causes of this big change. Readers might reason that there have been fewer gun homicides BECAUSE more citizens are armed. But that is speculation. The only thing we now know for sure is that more guns does not translate to more homicides in which a gun is used. (hh)

Ted Salmons responded on May 9: I can’t add anything to that story other than a hearty Amen!