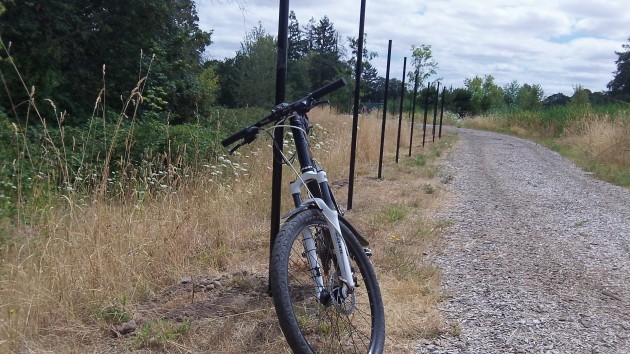 The posts have been planted in holes filled with concrete.

The fencing of America continues, this time at the Talking Water Gardens of Albany and Millersburg near the Willamette River. Why, you ask. Because they said so. The “they” in this case is the Oregon Department of Environmental Quality.

On a bike ride, I  noticed the fence under construction for about a quarter of a mile along the northeastern perimeter of the 39-acre engineered wetlands that opened in June 2012. There’s nothing on the outside of the perimeter path other than a vast tangle of blackberry vines and then First Lake. So why a fence?

Because it’s required under the funding agreement with the Department of Environmental Quality that helped pay for this project, I learned from Chris Bailey, the city of Albany’s interim public works operations director. The $13 million Water Gardens were partly paid for with $8 million in grants and loans, including federal stimulus money, funneled through the state DEQ.

Bailey told me that part of the deal with the DEQ was that a fence be installed to secure the facility in case securing it — keeping people out, that is — should ever become necessary. She couldn’t think of an example of such a dire emergency in this system of paths, ponds, weirs and waterfalls, and neither could I. She did mention that some time back, somebody reported a “suspicious device,” and they had to station guards on various points to keep people out while the bomb squad determined it was a harmless geocache.

About half the perimeter is already fenced, and the city has budgeted $50,000 to complete the chain link barrier now being built. Will people still be able to reach that cornucopia of blackberries down the bank? Only if they can figure out a way around the fence. (hh)