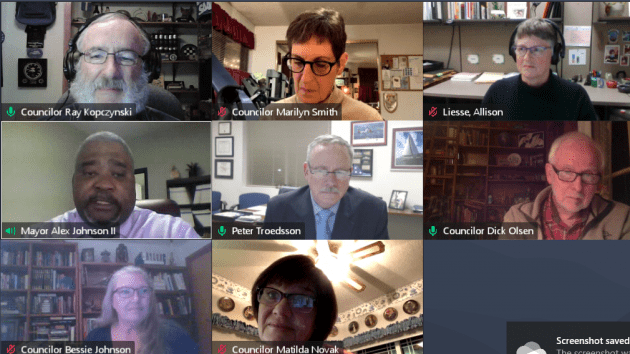 A screenshot from Wednesday’s council session, showing councilors and staff.

If you’ve sat through many Albany City Council meetings even if only as a reporter, you will appreciate an idea floated at the session Wednesday night: Increasing the efficiency of the meetings by making better use of time.

Mayor Alex Johnson II, presiding over the second session of his term, made a start by briskly running the council through its agenda, routine as it was.

♠ Time limits on speakers at public hearings and during “business from the public.”

♠ Starting the twice-monthly Wednesday regular sessions at 6 rather than 7:15 p.m. and ending them at 9 unless the council votes to continue past that hour.

♠ Having people register in advance if they want to address the council during “business from the public,” an item usually near the top of each agenda.

The idea is not to curtail anyone’s ability to address the council, the manager said, but to shorten the time spent in meetings, which is getting more important now that budget cuts are reducing the number of city staff.

Newly elected Councilors Marilyn Smith and Matilda Novak spoke out in favor of a limit on speeches to the council. Both said pretty much the same thing: If you can’t get your point across in three minutes, you either don’t have a point or need to reorganize your thoughts.

But Councilor Dick Olsen was skeptical of both the time limit and earlier starting time. He wants the council to let people talk and believes a 6 p.m. start may interfere with some citizens’ Wednesday night church events.

Nobody mentioned putting a limit on the length of time individual council members can talk, or how many times they can repeat themselves. In any case, the council made no decisions on the efficiency ideas. 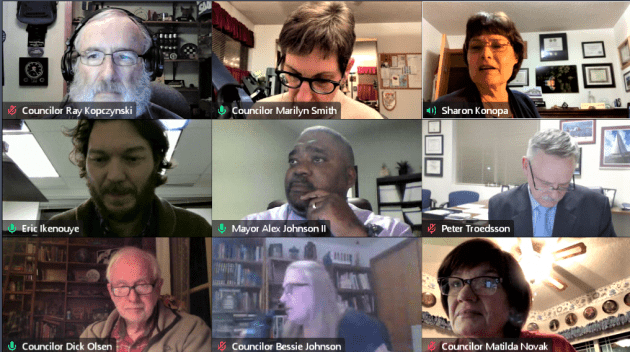 Sharon Konopa, top right, thanks the council Wednesday for naming a room in the public library for her. Through 2020, she spent 24 years as a councilor and mayor.