More density: Looking at a request to rezone – Hasso Hering

More density: Looking at a request to rezone 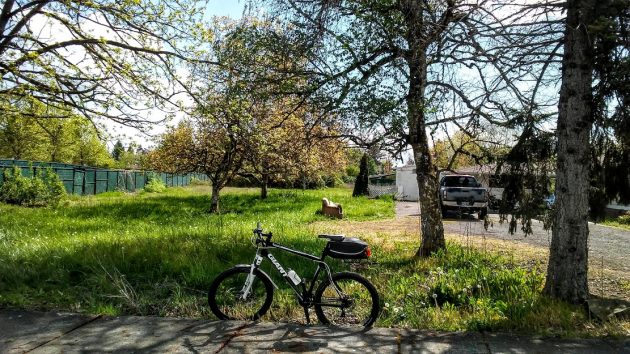 A look 2710 Grand Prairie Road, an address about to be rezoned for higher density.

Because Albany Councilman Dick Olsen stepped on the brake, the rezoning of a big tree-studded single-family lot for more apartments has been delayed three weeks, but chances are it will be approved when it comes up again on May 13.

The 1.3-acre property is at 2710 Grand Prairie Road, on the southeast corner of Grand Prairie and Waverly Drive, across from Grand Prairie Park on one side and the Latter-day Saints Church on the other. The site holds a single-family house built in 1955 and some outbuildings. On the tax rolls it’s valued at $159,240. Last May, the Spies Real Estate Group of Corvallis bought the place for $291,500.

But Olsen questioned the idea of apartments at the site, and he withheld his support for the unanimous consent required to have the rezoning ordinance read by title only at the same meeting. So final action was put off till May 13.

The present zone allows a maximum of 32 units on the 1.3-acre lot, compared to 45 units under the proposal. But there are rules on the size of units allowed in the space available. With the “attached” zoning, the site could hold 37 one-bedroom units or 31 two- or three-bedroom units. The existing zone allows 28 of the smaller apartments or 23 bigger ones.

Single-family residences are not allowed in the proposed new zone; housing units must be “attached” instead. Attached units are allowed but not required in the present zone and can’t be taller than 45 feet. In the proposed zone, buildings may be up to 60 feet tall.

There’s no on-street parking at the intersection, and Olsen wondered where residents would park. A representative of the Corvallis engineering firm on the project testified he was confident the required parking would fit within the property.

The council got no public comment on the zone change.

All this took up some time at the virtual council session last Wednesday. On Saturday the bike took me to the southeast Albany neighborhood around Grand Prairie Park, so I took a look at the site.

A wooden fence on the property has fallen apart, but aside from that, the quiet lot looked like it had been a very pleasant place to live for the 65 years since the house was built. I imagine the trees are all going to go once the developers submit a site plan, get it approved and start building something that meets the requirements of “medium density attached.” (hh) 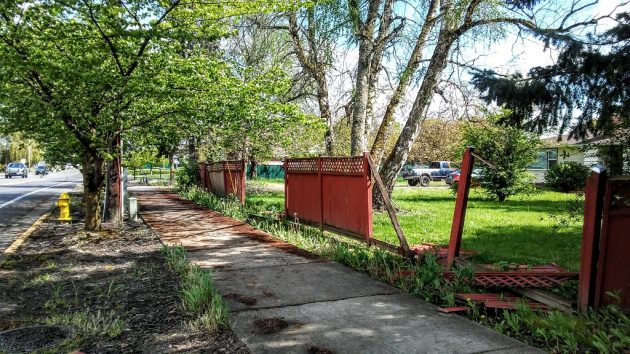 Looking at the site from near the corner of Waverly and Grand Prairie.

27 responses to “More density: Looking at a request to rezone”