More bulbouts, and a question 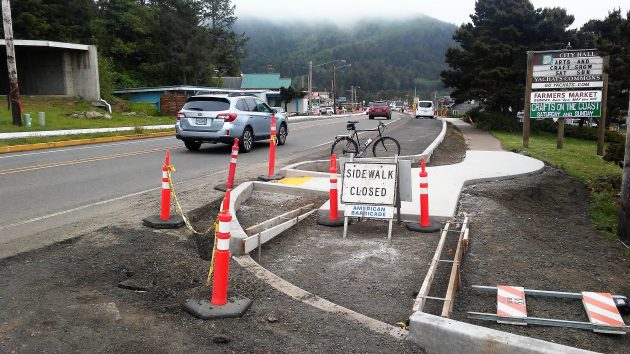 Bulbouts are the fashion everywhere, as here in a highway project through Yachats on the coast.

The official name, I think, is sidewalk extensions. But you can also call them bulbouts. They’ve been a favorite of street planners for years, and Albany is getting a bunch more as part of the CARA streetscape project that’s going to start in June.

The idea behind bulbouts is that they increase traffic safety. They shorten, by a few feet, the distance that pedestrians have to walk in order to cross the street. Even though they don’t extend into the normal driving lanes, they create the appearance of a narrower street and thereby the speed of passing cars. And they supposedly make pedestrians waiting to cross the street easier for drivers to see.

That last point raises a question: If you see a pedestrian standing on the curb of a bulbout, are you as a driver supposed to stop and let the person walk across? State law says that at all marked and unmarked crosswalks, drivers must yield to pedestrians who are “in the crosswalk.” So, are persons standing on the bulbout portion of a sidewalk “in” the crosswalk or not? If somebody knows the answer — I mean “knows” as opposed to “guesses” — feel free to respond. (It bugs me to have cars screeching to a stop when I’m standing on the curb, patiently waiting for a gap in traffic so I can leisurely cross the street.)

Strange as it may sound, I was thinking of all this when, on the bike, I saw the bulbouts that ODOT is adding to Highway 101 through part of Yachats on the coast. The idea of that $2 million project is, among other things, to improve safety for pedestrians and bicyclists. (In July 2013, a 75-year-old resident of the town was killed when he was crossing the highway, though not in the section getting the new treatment.)

In Albany, the $8 million streetscape project supported by CARA, the downtown urban renewal district, will be reconstructing 27 blocks of downtown streets.Two blocks will get only new underground water lines, but the others will get new sidewalks, among many other things.

Considering the volume of Highway 20 traffic on Ellsworth and the foot traffic to and from the market, a definitive answer to the question of people standing on bulbouts would be helpful indeed. (hh)


8 responses to “More bulbouts, and a question”