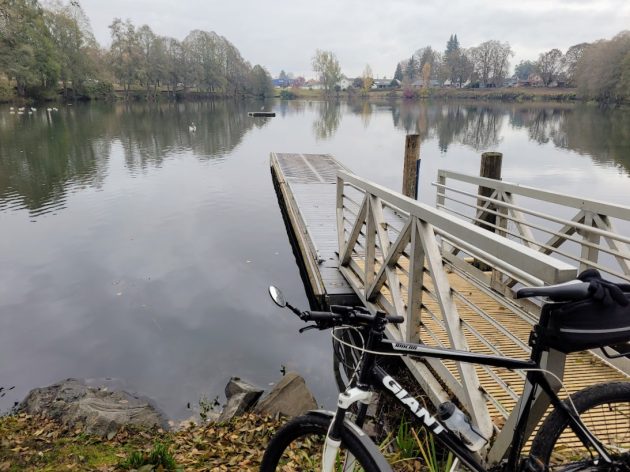 Waverly Lake the way it looked on Nov 25, a gray day.

There now is a chance of preventing algae from building up in Waverly Lake next year the way they did this year and in summers past.

The city council on Monday agreed to set aside $20,000 for treatment of the lake as proposed by the Albany Department of Parks and Recreation.

The money will come from an unanticipated jump in transient lodging tax revenue.

Income from the city’s 9 percent room tax this biennium has generated about $400,000 more than  budgeted. Hotel stays in town evidently did not decline as much because of Covid, or recovered faster, than city budgeters had expected when the two-year budget was prepared early in 2021.

The parks department says there’s a company that can clean Waverly Lake and install a fountain and two aerators for $20,000. Parks Director Kim Lyddane told the council Monday she expects this will keep the lake clear for a few years, presumably as long as the aerators keep going.

The Waverly allocation was a small part of what the council approved.

The package of additional funding also included $75,000 for a temporary stage at Timber Linn Park for the city’s summertime concerts in 2023 while Monteith Riverpark is rebuilt as part of the Waterfront Project.

The council also approved additional funding requests by the city’s contracted tourism promoters such as the visitors’ and downtown associations.

There was a good deal of back and forth about the details, such as the timing of a supplemental budget to formalize the changes, and about the city’s contracts with the associations.

But in the end the council voted 4-2 to approve all the requests for additional room tax allocations, with Bessie Johnson and Marilyn Smith opposed.

The parks department presumably now will work on arranging for the anti-algae measures at Waverly Lake. Expect a story on that when the details are set. (hh)