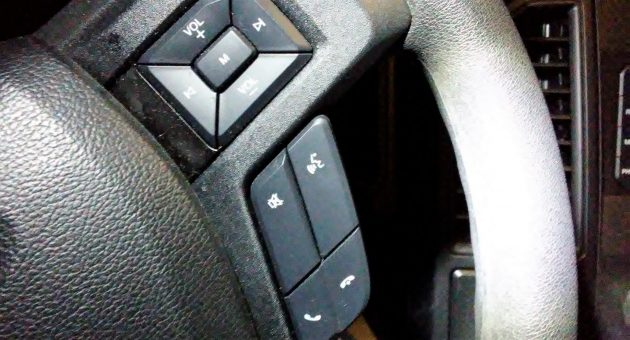 With a built-in phone, finding the right button takes your eyes off the road.

State Reps. Andy Olson of Albany, Dan Rayfield of Corvallis, and a few other legislators want Oregon to get tougher on distracted driving caused by handling mobile phones. But their bill on that issue has problems, and it’s not clear that passing it would have the desired effect.

Olson, a Republican, is one of three chief sponsors of House Bill 2597. Rayfield, a Democrat, is among the cosponsors. Their bill would expand the existing ban on using hand-held cell phones while driving. It would cover any “mobile electronic device” and prohibit its use not just for calling and texting but also for entertainment, navigation, accessing the Internet, and emailing. But the ban would not be “limited” to those uses. It would cover anything else for which a mobile electronic device could be used. And the maximum fine would be $2,000.

On Feb. 27, the House Judiciary Committee held a hearing on the bill. One problem that emerged was with CB radios, which evidently are still in use. The bill might subject truckers to fines if they keyed the hand-held mikes on their radios. (Another problem is that using mobile phones as cameras while driving presumably would be covered by the unlimited ban. No more pictures on this site illustrating various traffic or highway issues.)

Distractions have many causes, as we all know. As for phones, using the systems permanently installed in your vehicle can be far more distracting than answering a call on a mobile. Unless you use your car phone all time, when a call comes in you have to figure out which button to push. That takes your eyes off the road for seconds at a time, whereas you can easily keep looking out the windshield while reaching for a mobile and lifting it to your ear.

With that in mind, lawmakers might be tempted to prohibit the use of any electronic communication device while driving, not just mobile ones. But that would make all but useless all those newer cars and trucks with touch screens built into the dash. So they won’t even try that.

What’s the problem exactly? Albany Police Sgt. Robert Hayes testified for the bill on behalf of the police chiefs’ association, suggesting it would help cut down on wrecks. But another witness produced Oregon motor vehicle accident tables from 2014. They showed there had been more than 51,000 crashes that year. In only 272, or one-half of one percent, was a driver’s use of a cell phone identified as a contributing circumstance.

Even though we’ve had a law against it since 2009, the use of hand-held phones while driving is still fairly widespread, as far as I can see. Drivers know that they’re unlikely to get caught. So what good would it do to pass even more prohibitions when the simple ban we have is flouted as often as it is? (hh)