Millersburg, this is for you 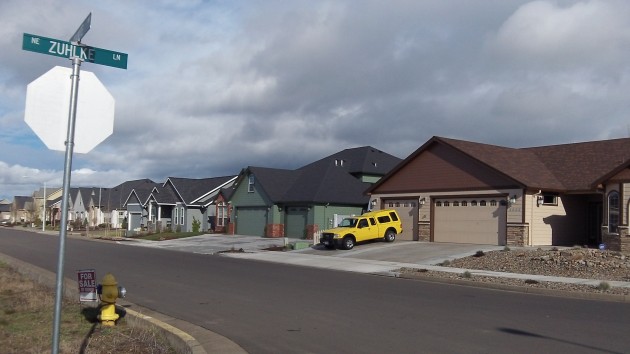 Residents here and on other Millersburg streets have an interest in the council’s deliberations on electric power.

The exploration of forming a municipal electric utility in the city of Millersburg started in the spring of 2013 with a confidentiality agreement between ATI Wah Chang and the city government. Some of the talk after that was in executive sessions closed to the public, but on Monday the public gets a chance to speak up and ask questions.

Pacific Power will host a public city council work session at 5 p.m. Monday (May 12) at its operations center, 830 Old Salem Road, within the Millersburg city limits. The city’s proposal to form its own utility is based on the idea of expelling Pacific and taking over its system in a forced purchase, and the power company wants to explain that this would cost Millersburg a lot more money than the city’s consultants have estimated.

As reported here earlier, Pacific says that separating the power facilities in Millersburg from the rest of the system is complicated and would cost an estimated $41.5 million, a price Millersburg presumably would have to cover. This is far above the $11.6 million that the city’s consultant has projected as the purchase price of the system if the Murder Creek substation was included in the takeover. Pacific says the substation is critical to its operations in and around the Albany area.

James Johnson, the engineer for the utility’s mid-valley operations, will be on hand Monday to answer questions following what is billed as a formal work session of the council.

The meeting may give Millersburg residents and ratepayers their first opportunity to delve into the utility proposal, the beginning of which had been kept hush-hush. Wah Chang, the biggest electric customer in the area, has been paying for the studies and legal work on the proposal so far. Wah Chang and Mayor Clayton Wood signed an agreement under which the city promised not to disclose confidential information it got from Wah Chang in April 2013. The city council did not announce the utility takeover proposal until September. In a copy of the April agreement obtained by Pacific Power, most of the terms are “redacted” or blanked out.

A similar whiting out of substance was done before the city released to Pacific a copy of the agreement under which City Attorney Forrest Reid this past February hired EES Consulting of Kirkland, Wash., to evaluate a feasibility study of the utility takeover by D. Hittle and Associates of Lynnwood, Wash. Among the blanked-out provisions are the “scope of services” by EES, its compensation, the “relationship between the parties,” and even “miscellaneous.” EES later issued a report fundamentally agreeing with the Hittle study.

Beyond Monday’s work session at the Pacific office, the Millersburg council has scheduled two public meetings on the power proposal for May 20 and June 19 at the Linn County Fair & Expo Center, Albany. Maybe after all those meetings, the council will let residents of the town know whether there will be an election on this issue in which townspeople get a chance to vote. (hh)

4 responses to “Millersburg, this is for you”