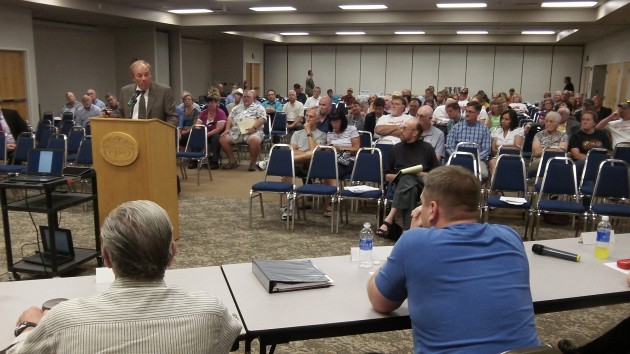 Consultant Gary Saleeba ticks off what he believes the advantages of a municipal utility to be.

If public sentiment expressed at a hearing Thursday carries any weight, voters in Millersburg are likely to get an election on the question of whether the town should expel Pacific Power and take over the electric system within the city limits. Speakers demanding an election (I counted seven of them, including the lead spokesman for Pacific Power) were greeted with vigorous applause from what seemed like a majority of the 80-100 people attending the hearing at the Linn County Expo Center. 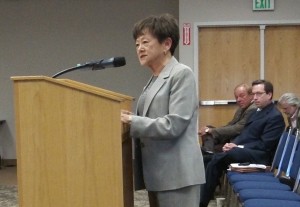 Former state Sen. Mae Yih urges the council to form the municipal utility because it would benefit residents.

It was the second of two planned public hearings before the Millersburg City Council, and it got a little testy at times as council members Jason Yutzie, Scott Cowan and Darrin Lane pushed back against criticism of the council’s handling of the public power plan in its early stages, starting in October 2012. Pacific has complained that the plan was discussed in secret meetings between the council, ATI Wah Chang and various lawyers and consultants. Lane countered that the meetings were legal executive sessions under Oregon’s public meetings law, a point Pacific’s Scott Bolton conceded, and that the press was given notice and invited to attend.

(As for the part about the press, the Albany Democrat-Herald’s reporter on the story told me the first notice he received came in October 2013, when the city issued a press release saying Wah Chang was funding exploration of the idea of a municipal utility. He attended some executive sessions after that, but Pacific’s criticism concerned mostly meetings before then during the year leading up to the public announcement.)

The election question dominated Thursday’s hearing. Pacific’s Bolton asked the council to put the issue on the ballot this November. The council did not react to that request but could take it up later.

Councilor Lane reiterated that the council had not made a decision on the public power plan or on whether to hold an election. After the hearing he told me his hunch was that the council would conduct at least an advisory election. (As of Thursday morning, Millersburg had 951 registered voters, according to the Linn County Clerk’s Office.)

Ortherwise the hearing was similar to the first one May 20, though less well attended. Pacific said the cost of the takeover, through condemnation, would be around $50 million and not the roughly $20 million estimated by the city’s consultants. On the other side, Gary Saleeba of the EES consulting firm of Kirkland, Wash., said a city utility would save ratepayers millions and help lead to more jobs in Linn County.

One of Saleeba’s points was that the typical Pacific customer’s monthly power bill was $100, whereas a city utility customer’s bill averaged $70. And he said the $70 covers everything, including paying off the cost of buying the system. Some in the audience questioned the $100 claim, saying their Pacific bills were much lower. But someone else said hers was higher.

Jin Denham of Wash Chang and Saleeba bore down on Pacific’s reliance on coal, the fuel that generates about two-thirds of its power supply. Their point was that complying with the Obama administration’s edict to reduce CO2 emissions by 30 percent would force Pacific’s rates higher.

Pacific, though, according to CEO Pat Reiten, has been planning to convert some coal fired plants to natural gas and shut down others at the end of their depreciation periods. He expects the Oregon part of the utility to be done paying for coal plants in 2033. (I met with Reiten on Wednesday for a chat. He also met separately with individual members of the Millersburg council. Yutzie told me he believed Reiten had met with all council members except Lisa Metz-Dittmer.)

One unexpected highlight: Mae Yih, the venerable former state senator, and the widow of a former Wah Chang president, made an appearance at the hearing. She said that during her 24 years in the legislature she had always focused on the best interests of citizens. She urged the council members to do the same and approve the municipal utility.

Another highlight: Pacific set up tables outside the Expo Center with information, cookies, ball caps and punch. Inside, the city provided more cookies. (I had three, one from Pacific and two from Millersburg.)

If the council has an idea of what it will do next on the public power question, and when, it did not announce its plan. (hh)