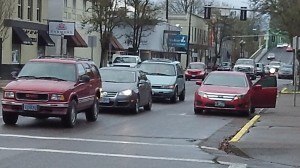 The mileage fee would apply only to vehicles getting 55 miles to the gallon or better, starting in 2015.

Since 2001, the Oregon Road User Fee Task Force has worked on finding a way to collect money from owners of four-wheeled vehicles that don’t burn fuel, or don’t burn much. In 2011 the group proposed legislation, and it was rejected. Now, in 2013, it is trying again with a somewhat different approach.

The bill leaves the amount of the fee blank, to be decided in the legislative process, but the task force has talked about a fee of one and a half cents a mile. That is very close to the amount of state road tax we all pay when we fill up at a gas station. The Oregon gas tax is 30 cents a gallon. Say you drive 7,000 miles a year and average 20 miles to the gallon. Do the math and you come pretty close to the the proposed amount of the in-lieu fee per mile. Owners who pay the road fee and also buy gas, for hybrids, could get a refund for any gas tax they paid.

The road fee would be paid on the number of miles that vehicles are driven. The mileage would be measured by a GPS-based smart-phone app or something like it provided by a private supplier. ODOT would have nothing to do with it, to reassure people who fear the system could let the government track them.

As an alternative, vehicle owners could pay a flat annual fee, but for most owners the mileage charge would be a far better deal. The gas tax alone, even though it was raised a year or two ago, has not kept pace with the cost of highway construction and upkeep.

This task force has worked on the issue for a dozen years. It came up with a rational approach, so now it’s time to enact the bill so ODOT can set up the program and carry it out. (hh)

From Ted Salmons: Some points I would have to take issue with. If the “state” wants this method then they should foot the bill for the devices and their installation. Does Oregon have the right to collect road taxes for mileage driven out of the state?  People do go on vacation.

hh: No fee would be due for travel out of state or on private roads. That’s where the GPS-based counting of distance comes in. I’ll check on who would bear the cost of installing or buying appropriate gizmos.