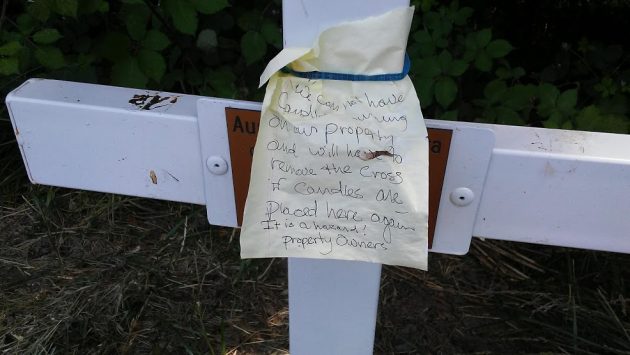 On June 24, this notice had been added to the roadside memorial for Aurelio Reyes Zamora.

Roadside memorials are meant to remind us of the dead but, judging by the hand-written note, this one on Bryant Way outside of Albany apparently did so in a way that prompted property owners’ concern.

“We cannot have candles burning on our property,” the note said when I saw it on June 24. It’s a reasonable point during the dry season (never mind the rain yesterday and today). And if candles are put there again, the note warned, the roadside cross would be removed.

The memorial was placed on the spot where, on Oct. 30, 2017, someone found the body of Aurelio Reyes Zamora, 43, a resident of Albany who had worked in farming and other jobs. At the time it was reported that he was last seen about a month before, and his family reported him missing a few days before he was found.

The Linn County Sheriff’s Office has been investigating the death, and it is still an open case.

Detective Lt. Andy Franklin told me today that the medical examiner found no signs of homicidal violence, so sheriff’s investigators are no longer treating it as a likely killing but still as a suspicious death. They’ve talked to Zamora’s family and friends and would still like to speak with anyone who had contact with him closer to the time he was found.

If anyone reading this has any information at all about this case, call the Linn County Sheriff’s Office. It would help investigators and maybe ease the mind of whoever placed candles by Aurelio Zamora’s cross. (hh) 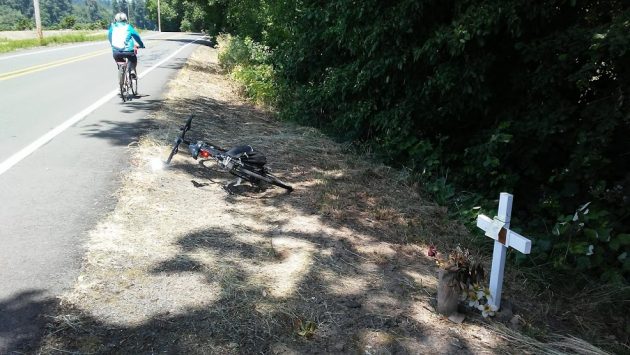 One cyclist rides past while another has stopped to check the Zamora memorial on Bryant Way.


One response to “Memorial on Bryant: Still an open case”