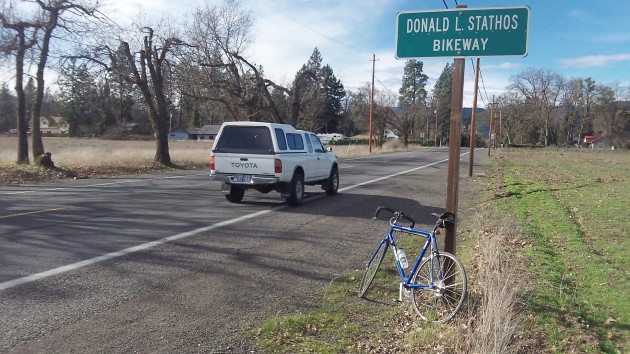 Improving this shoulder would be in keeping with honoring the father of Oregon’s bike lane program.

As far as bikeways go, the one honoring the father of the Oregon Bike Bill isn’t much. It’s nothing more than the narrow and occasionally bumpy shoulders of the Jacksonville-Medford road.

This is supposed to be the Donald L. Stathos Bikeway, named for the Republican representative from Jacksonville whose 1971 bill launched Oregon’s nation-leading bikeway program.

Stathos served in two sessions of the Oregon House, in 1969 and ’71. He died in 2005 at the age of 81. The road where he had often ridden his bike between his Jacksonville home and Medford insurance office was dedicated in his name in 1979.

This is said to be the first designated bikeway in the country. For that, Jackson County might want to spiff it up a bit. Next time the road is surfaced, it could stand to be widened foot or so and have a proper bike lane installed on the segment that doesn’t have one.

I’m on the Stathos bikeway only once or twice a month, if that. Lots of riders use it far more often, for daily commuting as well as weekend day trips. For them — and for motorists who would get a safer distance from cycling traffic — a full bike lane would be a great safety improvement to have.

If Jackson County’s bike committee is still active (the last meeting minutes on its website date from 2009), this would be a worthwhile project to take up. (hh)