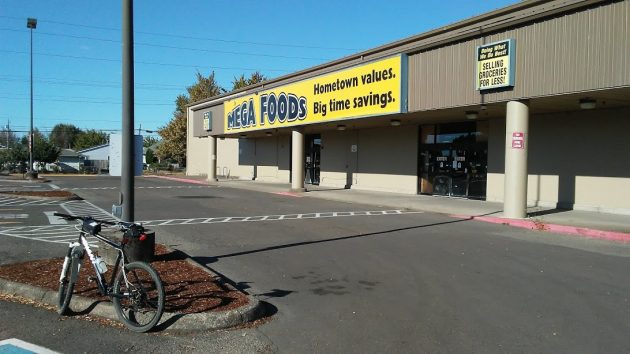 The Mega Foods supermarket on Queen Avenue, shown Sunday afternoon, was closed a year ago.

What exactly is the zoning issue that is making it hard to find a new tenant or buyer for the former Albany Mega Foods supermarket at 2000 Queen Ave. S.E.? I think I know the answer, but I didn’t get it from City Hall.

Pam Rushing, the Coldwell Banker Commercial agent marketing the property, told me last week there were complications with the zoning, and they were trying to work it out with the city.

Bob Richardson, the city’s planning manager, replied to my question this way: “We are still researching questions and possible alternatives regarding the Mega Foods site. I am going to share those with Mega Foods before responding to you, so they can get information first hand. Thanks for your understanding.”

Fine. I understand. I also don’t like to wait, so I looked at the site on the zoning map, and then read the zoning code.

According to county tax records, the supermarket contains roughly 42,000 square feet of floor space. And whatever the zoning was when it was built in 1990, the zoning obviously allowed it.

Now, however, the zoning map shows the Mega Foods site as “neighborhood commercial.” And the code says, “The only retail uses allowed are convenience-oriented retail and personal services-oriented retail intended to serve nearby residences and employees. Businesses are limited to a 5,000-square-foot maximum building footprint… Vehicle repair-oriented services, motor vehicle sales, large equipment sales, and bulk sales are prohibited.”

In short, a supermarket is no longer allowed in the very place where one operated for 27 years. Since Mega Foods had to close in the face of increased competition, especially WinCo, starting a new one there would be a long shot anyway.

I can’t remember when the zoning was changed, or why. The building (being used temporarily for equipment storage by Walmart, as reported last week) is within walking distance of several hundred apartments. I bet many of the households there miss having a full-service grocery around the corner. Again, though, even if they all shopped there every week, apparently it wasn’t enough for the market to stay open.

As for the current zoning, it’s hard to justify. Another convenience store? In 42,000 square feet? With a 7-Eleven on the corner across Queen?

Elsewhere in Albany, former supermarkets have been converted into gyms. Not sure there’s a demand for yet another exercise emporium, but even if there is, “neighborhood commercial” does not allow “indoor recreation.” So even that alternative seems to be out.

There’s a movement around the country that considers zoning as causing far more problems than it prevents. The inappropriate zoning of Southeast 2000 Queen Avenue is a case in point. (hh)