Median cables prove their worth 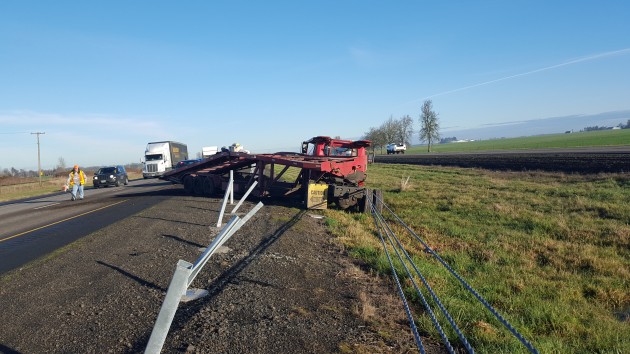 The Oregon State Police provided this shot of one of the crashes on I-5 Monday.

The median cable barrier installed on Interstate 5 a year ago is working, judging by this Oregon State Police photo Monday. Now if we could only get drivers to pay constant attention, the barrier and other preventative measures would be needed less often.

About 6 on Monday morning, the state police said, a 46-year-old man from Salem was driving south on Interstate 5 near the Boston Mill Road overpass in Linn County when he apparently passed out or died at the wheel of an undetermined cause. His Kia SUV drove off the road to the right and eventually got stuck in a muddy field.

That should have been the sad end of it. But no, other drivers evidently slowed down, congestion ensued, and there were three more crashes involving seven vehicles, the latest at about 10 a.m., nearly four hours after the first.

The state police said the additional crashes “occurred as a result of traffic congestion in the area.” They were being kind. Congestion does not cause crashes. Inattention does. In all three cases, vehicles had to slow down and others either plowed into them or had to brake so hard they lost control .

In the second of the additional crashes, an empty truck towing a car trailer was in the left lane, didn’t slow soon enough, braked hard, jack-knifed, hit an RV towing a Jeep in the right lane and then slammed into the cable barrier to the left. Judging by the picture, the cables kept it from careening farther into the median, perhaps even from entering the northbound lanes and causing more havoc there.

ODOT had the cables strung about a year ago under a $7 million contract covering 42 miles of freeway in Linn and Benton counties. This was after there had been 35 reported crossover collisions on I-5 in Linn County alone from 2008 through 2013, resulting in four deaths and 43 injuries.

We didn’t need proof that the barrier was needed. But the photo from Monday’s crash — and the fact that this crash injured no one — makes clear that the cables were a good idea. (hh)


4 responses to “Median cables prove their worth”