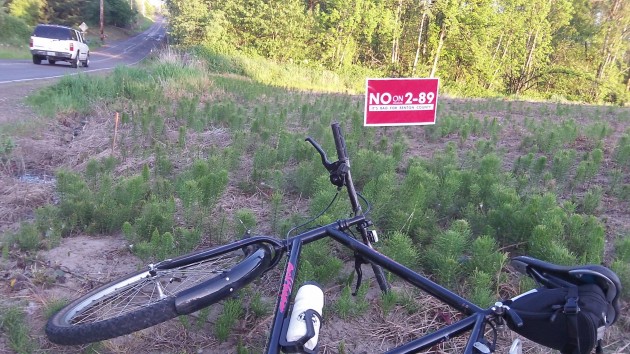 Pausing by the roadside to get a photo to go along with this story.

Why are our local ballot measures so mysteriously and awkwardly named? The answer is embarrassingly simple, but I didn’t know it until my curiosity finally got the better of me and I looked it up.

So why the hyphenated numbers? I found the answer in a 2012 summary of election law put out by then-Secretary of State and now Gov. Kate Brown. At both the state and local levels, measures are numbered in the order in which they are filed with the secretary of state or local election office. And locally, the summary explains, “County, city and district measures must begin with the county’s prefix number (starting with Baker County as 1 and ending with Yamhill as 36; all counties are numbered based on their alphabetical order).”

So that’s it. The Benton County initiative attempting to ban genetically modified organisms starts with 2 because Benton is second after Baker on the list of counties. And the city measures in Linn County start with 22 because, well, Linn is 22nd on the roster. Simple, isn’t it?

There’s likely to be less shrugging of shoulders if you talk about the Albany police and fire building bond instead. (hh)