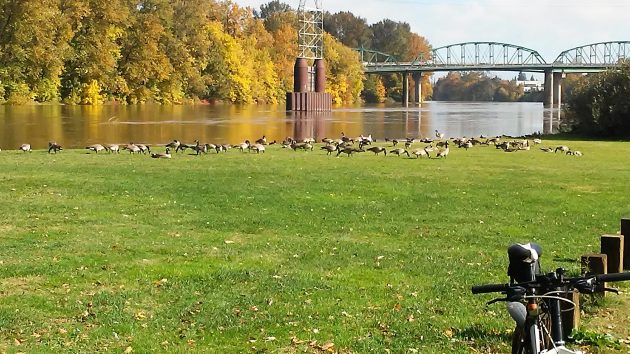 Geese stopping in Bryant Park during their autumn migration had nothing to do with what the Albany City Council had on its agenda Monday, but they made for a better picture than parking issues and garbage rates.

While the geese were nibbling grass and resting by the banks of the Willamette, the council (among other things) agreed on parking changes around the post office, was routinely informed of a 3.5 percent price increase for Republic Services’ trash and recycling service on Jan. 1, and probably prolonged its next few meetings by adding a nonvoting member in place of vacationing Mike Sykes.

The only thing unusual was the appointment of the stand-in for Sykes, which the council did on a 4-2 vote — with Sykes joining the majority by cell phone from somewhere on the road. Two weeks ago, with Sykes already absent, the council had declined to ratify his naming a “guest councilor.” Had Sykes not been allowed to vote in absentia, the outcome Monday would have been the same.

In 2009, the council adopted a resolution allowing members to appoint, with council consent, a stand-in from the same ward to serve “once each year” when they have to be absent. Sykes had told the council he would go on an extended vacation and miss several meetings. He wanted to name Scott Pierson, a member of the budget committee, to sit in for him.

That’s what the council confirmed Monday, over the objections of Councilors Dick Olsen, also representing Ward I, and Ray Kopczynski of Ward II. Councilman Rich Kellum moved to allow Pierson to sit in — not once as the 2009 resolution said — but “on all regular and work session council meetings in a nonvoting capacity” while Sykes is on his current vacation.

Mayor Sharon Konopa also objected, in vain. She said council meetings likely will be prolonged as proceedings are explained to the guest — and for what, since he won’t be able to take part in decisions. And the person responsible — the absent member — won’t be subjected to this because, well, he’s away.

Ah yes, the parking. After chewing this over for a couple of prior meetings, the council Monday raised no objection to changes in allowed parking times around the post office. On Calapooia Street, 11 of 19 new spaces will be designated as three-hour-customer and employee-permit spaces. The other eight, the same number as before the street was rebuilt this year, will remain unrestricted. On Second Avenue in front of the post office, the 30-minute limit will be changed to three hours to accommodate customers at the PO as well as places across the street.

The Republic Service price hike taking effect in January averages out to 74 cents a month for the company’s residential Albany customers. The 3.5 percent boost was determined based on the Consumer Price Index in Portland and Salem, the price of diesel fuel, and the dumping rate at Coffin Butte. The council had agreed to the formula several years ago.

As for the geese, they don’t care about any of this. They’ll be long gone. (hh)