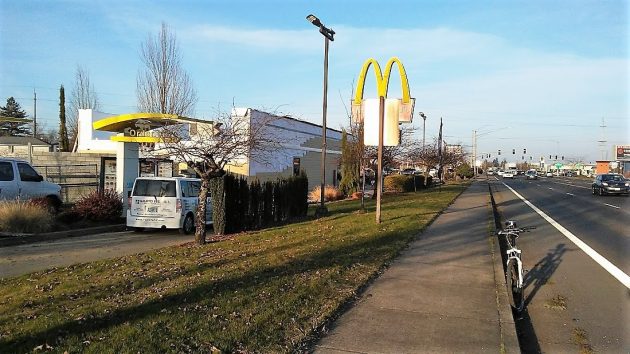 The McDonald’s remodeling project at 1820 Pacific S.W. on the afternoon of Dec. 13.

The West Albany McDonald’s has been closed for a while for remodeling, depriving me and many others of a convenient stop for a meal. But something else is noteworthy about the project: the city’s fees.

According to the Albany Building Division, the owners are remodeling the restaurant to eliminate mansard roofs and replace them with parapets, install new exterior accent walls, supply new interior finishes to the dining area and restrooms, upgrade the access for people with disabilities, and build a new trash enclosure.

Why are the fees so high? Because they include $62,930 in transportation system development charges or SDCs. That’s the money the city collects from new development to help pay for improvements that growth makes necessary in the street system.

But why collect system development charges from a business that’s been in the same place for decades? Well, engineer Aaron Hiemstra of the Public Works Department explained to me, the remodeling also increases the floor space by about 1,000 square feet. And this calls for street development fees to be collected based on formulas set down in the street SDC methodology that’s reviewed and approved by the city council from time to time.

The McDonald’s SDC charge was based on the formulas for fast-food restaurants with a drive-through. They’ve had the drive-through forever, and adding to the interior space will not likely raise the number of vehicles going past the windows outside. But that’s irrelevant. The formula is the formula, and that’s it.

Well no, not quite. Instead of paying the calculated fee, McDonald’s could have commissioned a traffic study, including traffic counts on nearby intersections and streets including state Highway 99E. Chances are that would have cost more and taken longer than paying the fee.

Okay, you say, get to the meat: When are they going to reopen? The reader board on Pacific says the place will be closed through Dec. 24. Will they make it? Go and see on Christmas Day. (hh)