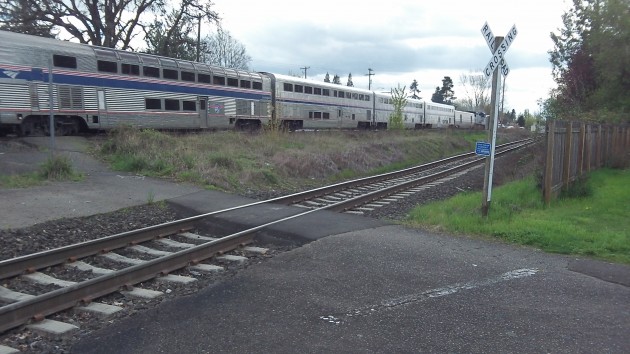 Coast Starlight No 11 cruises through Albany, pretty much on time.

With one exception caused by a thief in California, Amtrak trains have been arriving in Albany more or less on time this week. But the mayor is worried that a proposed change in federal regulation would weaken the law that says railroads must give passenger trains preference on their tracks.

On Monday Albany Mayor Sharon Konopa received the council’s consent to sign a letter protesting the change proposed by the Surface Transportation Board. Mayors Kitty Piercy of Eugene and Charlie Hales of Portland also signed. They see the proposed change as “detrimental to implementing our state and local goals regarding passenger rail service, carbon emission reductions, and increased economic vitality.”

Under railroad laws Congress passed in 1970 and later, freight railroads must give preference to passenger trains except in emergencies or when a railroad has received approval of an exception. The transportation board published a proposed rule it said would clarify what is meant by “preference.” Rail passenger interests across the country have opposed the change, saying it would jeopardize efforts by Amtrak trains to run on time.

So how are the trains stopping in Albany doing in terms of being on time? This month so far, two of the six state-supported trains in the Amtrak Cascades service have been 100 percent on time. Overall, the April on-time record of all six — as determined by arrival at Portland and Eugene, not their intermediate stops, was 88.3 percent.

The Coast Starlight’s record so far this month is about the same, 88.5 percent. The southbound Train No. 11 from Seattle stops in Albany at 4:10 p.m. and usually does so within a few minutes of that schedule. On Sunday it was three minutes early, and the longest it was late the other days was 14 minutes on Wednesday.

The scheduled 1:22 p.m. arrival of Train 14 from Los Angeles, with far greater distance to cover and more opportunities for disruptions, has been more variable. No. 14 was 7 minutes early on Monday, but the next day it got to Albany Station six hours and 10 minutes late. The other days this week, it was late between 19 and 48 minutes. To what extent freight operations by the Union Pacific had anything to do with routine delays did not show up on the Amtrak time-check website, but they had nothing to do with the problem on April 12.

I asked Bob Melbo at ODOT-Rail what he knew about the cause of Tuesday’s long delay. As usual, he had the facts: “Around 1:47 a.m. that morning No. 14 struck a pickup truck that was stuck on the track about 1 mile south of the Chico, CA, Amtrak station. The truck was not at a crossing, public or private, and it was loaded with tools and portable generators that had just been stolen from a fenced Union Pacific maintenance compound a short distance away. The truck was a 4×4 and the thief evidently was trying to exit the rail yard via a route that would not take him past any nearby residences where potential witnesses might be awake. When he saw the train approaching he abandoned his truck and fled on foot… No one was hurt on the train, nor was it damaged significantly, unlike the vehicle. The investigation with the police consumed an hour and a half, or so, and the Amtrak crew requested they be relieved… Likely it was the time necessary to call the relief crew on duty and then transport them the 75 miles from Sacramento to Chico that consumed the most time… Anyway, that incident penalized the train for 5 hours and 28 minutes. Later, signal problems around Texum, south of Klamath Falls, added another 37 minutes of delay.”

As for the Cascades trains Amtrak runs under contract with ODOT, ridership has been growing, Melbo reports. Through the first three months of 2016, ODOT counted 26,061 passengers, up 9 percent from the same period in 2015. The trains are state-funded through June 2017, and the legislature will be asked to keep them rolling when it meets next year. If you want to raise the likelihood that this gets done, add to the passenger count: Buy a ticket and get on the train. (hh)