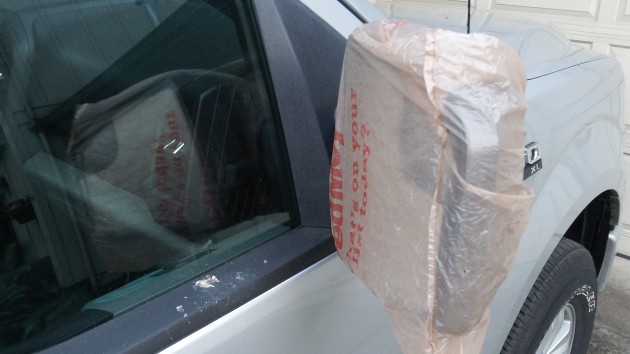 From the evidence, it appears my countermeasure came too late.

This is no news to most people, probably, but until a few years ago I had never noticed the problem: Birds perching in front of passenger-side car mirrors where they can see themselves, and leaving a mess behind.

Numerous online sources say this behavior is common among many species of our smaller feathered friends, especially during the mating and nest-building season of spring and early summer. The prevailing theory seems to be that some sparrows, towhees and robins, among others, mistake their own reflections as rivals that need to be driven away from their own territories. So they keep pecking at the mirror as though they are attacking it. A few online commenters think the birds are behaving this way because they are attracted to their own reflections as potential mates, but does that sound likely?

The way to save these fluttering fiends from their own delusions is simple: Cover the passenger-side mirror. Plastic shopping bags are handy for this. They are the right size. Their handles make it easy to tie them in place. And when you’re ready to drive off, they are easy to tear off again and stuff in your pocket for disposal later. (You will forget the first few times and have to stop again after leaving the driveway.) And by the way, you don’t have to deal with the driver’s side mirror because it’s the wrong angle for avian self-observation.

As you can see from the photo, I forgot to act in time. So this information, repetitive though it may be, is presented as a public service to save you from having to clear your car door of poop. (hh)