Marijuana initiative: What’s in it 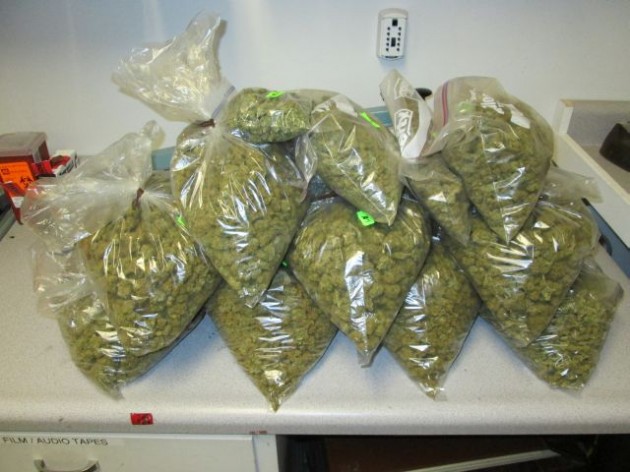 State police confiscated this pot: We’ll likely vote on the stuff this fall.

So it looks as though we’ll be voting this fall on an initiative to create and regulate a legal industry supporting the recreational use of  marijuana. The sponsors turned in more than 145,000 signatures Thursday. They claimed to have checked many of them for their validity even before the state does the same, and they needed only 87,213. So now it’s time to look at what this measure would do.

The most striking feature is that the job of the Oregon Liquor Control Commission would be vastly increased. The agency, which now runs Oregon’s state liquor monopoly, would be charged with licensing growers, wholesalers, distributors and retailers of marijuana products. It would also be charged with enforcing the record-keeping requirements. Those are intended to make it possible for the state to collect taxes from the commerce in pot that the bill would encourage.

Licensees would be barred from selling mature plants, and anyone else would be prohibited from possessing mature plants. Cities and counties could regulate the “nuisance aspects” of marijuana stores. But they could ban such stores only as the result of local initiatives to be put on the ballot if at least 10 percent of registered voters sign petitions.

Use of marijuana in public would be prohibited. Homegrown marijuana would be exempt from the licensing and tax requirements, but homegrown product could not be produced in public view. ID would be required to buy marijuana, and persons under 21 would be barred from buying or using it, similar to the existing law on alcohol. Research on driving under the influence of marijuana would have to be done. Exporting marijunana from Oregon, or importing it, would be illegal. The OLCC would impose minimum standards for marijuana quality. Homegrown marijuana extracts would be banned.

Offenses against these and other provisions would range from violations and misdemeanors to felonies. The medical marijuana law would not be affected.

Having read the 36-page initiative, and thinking of the stacks of regulations it would entail, our present marijuana laws seem a model of simplicity, even if they are often violated. The question is whether the added tax revenue is worth the vast new system of state regulation, licensing and potential penalties this initiative would create. (hh)


5 responses to “Marijuana initiative: What’s in it”