These little wavelets on the Willamette, left by a passing boat near Bowman Park on Monday, are nothing compared to the big wakes caused by some powerboats lower on the river. Now, a bill trying to prevent big waves from damaging the banks in the Willamette River Greenway is likely to become law.

House Bill 2351 authorizes the State Marine Board to adopt special regulations for boats on the river within the greenway. The bill was prompted by concerns that on the lower Willamette, from Newberg north, the growing sports of wake surfing and wake boarding were making too many powerful waves. And this had the potential of undermining the banks and causing more erosion than normal.

The Oregon House passed the bill on April 8. The vote was 50-10. Among the opponents was Albany’s Shelly Boshart Davis. A number of people with boats or in the boating business, including a couple from Albany, had testified against the measure on the grounds that it would lead to more needless and bothersome regulation.

In the Senate, all five members of Environment and Natural Resource Committee, including the two Republicans, endorsed the measure on May 14. The full Senate is set to vote on Tuesday (May 21).

The bill says that on the river within the greenway, the Marine Board may set speed limits and make other boating rules to protect the shoreline, public and private property, fish and wildlife habitat, and vegetation.

Tugboats and other working vessels are exempted. Remember we’re talking about the lower river here. In the mid-valley, tugboats haven’t been seen for half a century or more.

Excessive wave action has not been reported as a particular problem on the river from Corvallis through Albany to Buena Vista. In a canoe, though, you occasionally get jostled about by power boats as they pass.

But if the likes of various wake- or wave-riding sports ever catch on around here and start doing damage to the banks, this new law might come in handy in getting the Marine Board to act. (hh) 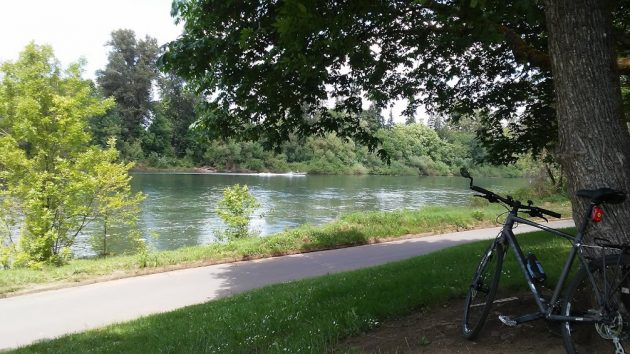 Nearby Bowman Park on Monday, a power boat heads downriver near the far bank.