Main Street fix will have to wait 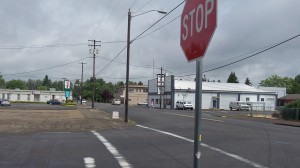 At this time of day — late morning — congestion seems to be largely absent.

If you were anxiously awaiting the long-planned renovation of Albany’s Main Street from First Avenue to Santiam Road and Fourth Avenue, you’ll have to wait another year.

The project had been scheduled this summer, and the city staff had estimated the cost at $1.5 million. But when bids were opened on June 4, only three companies competed for the work. The city staff said the low bid of $1.6 million was rejected because the bidder failed to submit a required disclosure form on subcontractors. The two remaining bids were for more than $1.9 million and more than $2 million, respectively.

On Wednesday night the city council rejected both remaining bids and decided to try again and call for new bids early next year. The problem this year, the council was told, was that the project was put out for bid too late and most contractors already had their work for the summer lined up. Councilors thought the city might save two or three hundred thousand dollars by waiting a year.

This project includes a big roundabout on Main and Third and Salem. This entailed the demolition of a building, which has already taken place. The project has been talked about for at least three or four years. But now motorists and business owners in the neighborhood will have to wait at least another year for the occasional traffic congestion there to be resolved. (hh)

Matt Bixby responded on June 14:  I have taken my children to school via Old Salem & Main for the past five years. The worst time I’ve experienced is on the return trip, around 3 pm. For as many traffic variables as one must contend with (especially making a left from Old Salem onto Main), I’m surprised there aren’t more accidents.