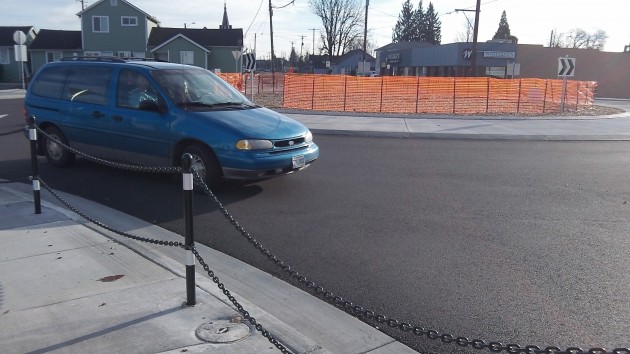 Who needs a wall where the temporary plastic is?

Since it was completed last September, the new roundabout on Albany’s rebuilt Main Street has been tempoarily marked with orange plastic while the city tries to decide whether to get fancy with decorating the place. Nobody asked me, but I would put in a tree and some low-maintenance shrubs and forget about anything that costs tens of thousands of dollars more.

It has fallen to the advisory board of the Central Albany Revitalization Area to decide whether to pay for something more elaborate. The board agreed to go ahead with a concept that included a concrete or stone wall around the rounabout island. On the wall, there would be a legend that says something like “Welcome to Albany,” and there may be a reference to the historic districts.

The mainremaining issue was the expense, and the city staff was to come up with a specific request on which the CARA board could act. The board’s scheduled meeting in January was canceled because the roundabout treatment was the only major item on the agenda and Public Works had not yet received an estimate of the expense. Now the estimate is at hand, but Public Works didn’t want to give me the amount until it’s presented in a staff report to the CARA bopard. Previously, the board got a guess that the full treatment including wall and lettering might run between $70,000 and $90,000, as opposed to $20,000 for landscaping alone. Whether the actual estimate is higher or lower, it’s far too much for what essentially is a useless bit of vanity construction.

Nobody who drives around there needs to be told that he’s in Albany. The wall itself has no legitimate function either. The board was told it keeps drivers from looking across the island, which is supposed to be a good thing because they’re supposed to look to the left to see if any traffic is coming before entering the circle. But having a wall with signage may do the exact opposite of what is wanted. Drivers will look at the sign instead of to the left. And if they don’t look at the sign, why put it there at great expense?

In any case, two other Albany roundabouts, on North Albany and Knox Butte roads, function fine with only landscaping.

Another thing: Albany’s municipal expenses have been rising faster than its revenue. CARA may not be the main reason, but it gets tax money that otherwise would go to the city general fund. And unrelated to current expenses, voters in May will be asked to approve a bond issue to pay for new police and fire department buildings.

If there is ever a time when spending tens thousands of dollars on unnecessary decorations is a good idea, this is not it. (hh)