Lucky to be alive: Tree falls on Linn Ave. 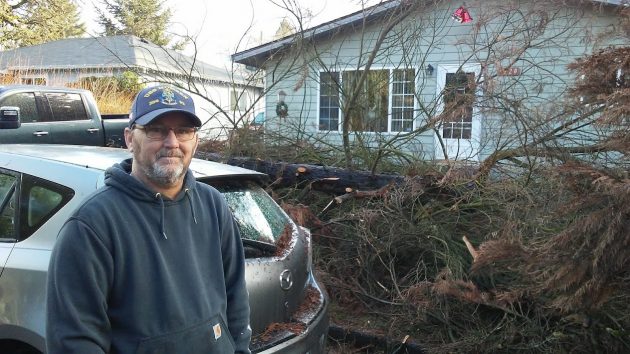 On Tuesday afternoon Scott Boysen stands outside his house, which was spared when a neighbor’s tree came down Monday.

Scott Boysen says he’s lucky to be alive. We were standing in front of his house on Linn Avenue, and he was telling me what happened Monday.

It was about 4:30 in the afternoon, he told me. He had parked his truck in the driveway of his house at 1920 Linn Ave. N.E. and had just gotten out of the cab. There was a gust of wind.

He looked up and just had time to take a step or two back, out of the way of a big tree from next door that was crashing down.

Scott and his wife, Dollie, have lived at the address on this quiet block of Linn Avenue for 25 years. The falling tree missed their house. It almost missed their truck too. But some branches hit the front of the rig and knocked something loose.

This looked like an evergreen, but I couldn’t tell what kind. It appeared to have been dead or dying for some time.

Tuesday afternoon, the Boysens were awaiting the arrival of a tree service that would clear the wreckage of the trunk and broken limbs blocking their house. The service also was to take down two or three similar trees still standing along the property line where this one had stood.

By chance I passed by there on Tuesday afternoon and found the Boysens talking with someone about what happened. Everybody was glad that the damage appeared to be slight and no one got hurt. (hh) 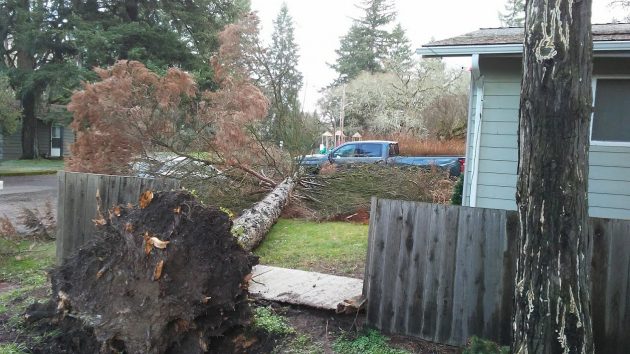 On Tuesday afternoon the tree lay where it fell the day before.


4 responses to “Lucky to be alive: Tree falls on Linn Ave.”