Written May 20th, 2015 by Hasso Hering
Comments: one response. 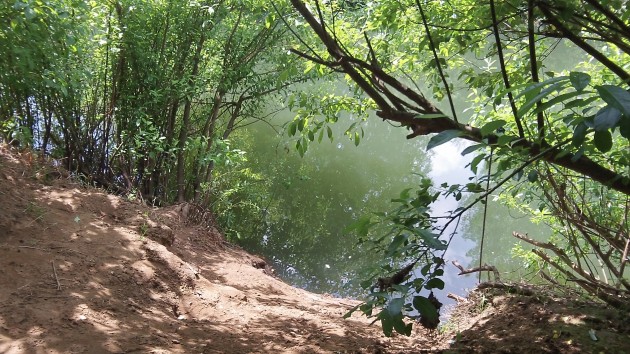 On Sunday I speculated that this summer might be the time that river boaters would finally be able to use the promised “paddle access” at Luckiamute State Park. But no, construction of this launch site on the Luckiamute River is still being delayed, and it seems to me the fault lies with making this project more complicated than it needs to be.

On Sunday I reported on this after watching a couple of guys maneuver their kayak down the steep bank that serves as the launch site now. Monday I asked the parks official who had been my contact last year about current plans, and I learned he had left the department. Instead I heard via email from Dennis Wiley, the Willamette District manager for the Oregon Parks and Recreation Department. He’s based in Gervais, and he wrote:

“The paddler launch was scheduled to be constructed during this ’13-’15 biennium. It had been delayed due to a lengthy permitting process and formal consultation with federal agencies. We now have the permits in hand; however upon additional engineering analysis, some design flaws were discovered that would prohibit us from being able to install and remove the launch safely each spring and fall as required by the permitting agencies. It was decided to again delay the project to have some more engineering input on the design. The intention is to construct the launch during the ’15-’17 biennium. The project is surprisingly complex due to the launch site having extreme fluctuations in water levels through the paddle season, as well as the narrowness of the river requiring a cantilevered ramp system.”

I was surprised to learn that the launch system will have to be taken out each fall, only to be put back in each spring. Wiley says the permitting agencies — the U.S. Army Corps of Engineers and the National Marine Fisheries Service — consider this necessary because leaving the dock in place during wintertime flooding would be considered hazardous. Really? Wouldn’t it just float on the water, going up and down with the level of the stream?

I don’t know what the proposed system is estimated to cost, but you know it won’t be cheap. How about a simpler alternative?

How about just carving a shallower launch ramp into the steep bank? A floating dock would be nice, but it’s not necessary to launch or retrieve a canoe or kayak. And the Luckiamute is not nearly wide enough for bigger craft.

Wiley’s reaction to my idea was not encouraging. “The steepness of the bank prohibits creating a gentle slope; the length of the cut would be quite extreme to be able to access at low summer flows.” But, he adds, “All of these questions will be re-examined with an engineering re-look at the project.”

They might consider that at very low summer flows, there are enough obstructions in the Luckiamute to make canoeing difficult, so the ramp would get little use. At other times, a reasonably sloped ramp, without a floating dock, would do the job. Paddle craft can usually be carried, so even a series of steps would help. Anything like that would be easier to use than the dirt cliff there now, and it would help fulfill the mission of this new state park without further delays. (hh)


One response to “Luckiamute launch: Too complicated?”