Lowe’s not yet ready to decide 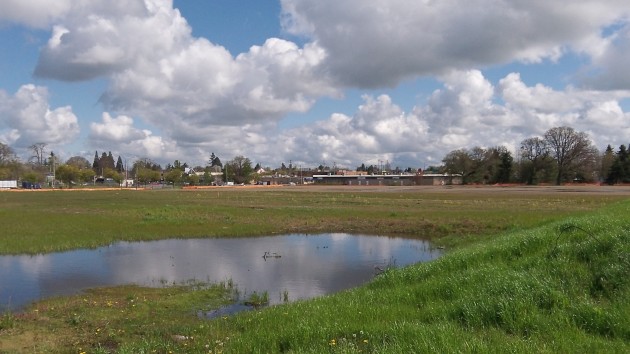 A big puddle covered part of the Lowe’s site earlier this month.

Executives at the Lowe’s company appear to be in no hurry to decide whether to go ahead with, further delay or scrap their plans for an Albany store. A couple of weeks ago City Manager Wes Hare had been told the company’s real estate committee would decide the timing of the project on April 16. But this afternoon, Hare reports, he received an email saying the decision had been delayed until June.

“Apparently,” Hare goes on, “Lowe’s cancelled most of their building projects a couple of years ago, but because of their contract with us and the amount they have invested in the site they are still interested in building here. They may ask for an extension of a few months on their opening date of Jan. 1, 2015.”

The company had acquired 12 acres at the southeast corner of Ninth Avenue and Oak Street for a home improvement store and gardening center, a plan that required extensive street improvements near the site. In 2013 the property was cleared and graded as and made ready for construction to start, but nothing has happened there since.

The city of Albany completed more than $4 million in street improvements as required in a development agreement with Lowe’s, and in return the company committed itself to open the store by Dec. 31, 2014. Unless the agreement is changed, which would require approval by the city council, the company will owe the city $1,000 a day for every day past the end of the year that the store is not built, up to a total of $2 million. (hh)


2 responses to “Lowe’s not yet ready to decide”