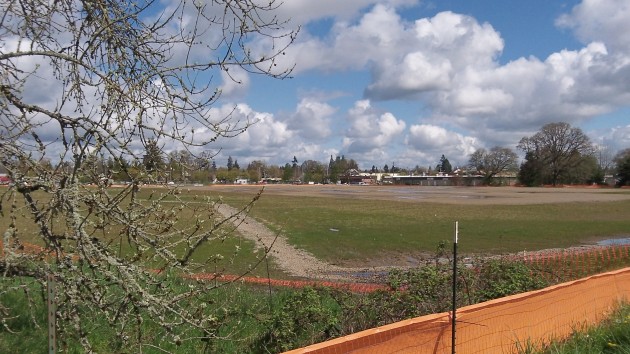 The vast empty lot basks in the spring sunshine on Friday.

On Facebook and elsewhere, the questions keep popping up: Is the Lowe’s company going ahead with its long-pending plans to build a home improvement center at Ninth Avenue and Oak Street in Albany? And if so, when? The answers may be only days away.

I asked City Manager Wes Hare this morning what Lowe’s had told the city about its plans and what would happen if the store did not open by the end of the year as specified in the development agreement the city and the company signed. Hare’s response:

“I received an e-mail from Mark Stoner at Lowe’s yesterday. He expects a decision on the timing of the project to be made at their April 16 Real Estate Committee meeting. If the Albany store is not open by December 31, 2014, a penalty of $1,000 a day for each day the store is not open will be assessed up to a maximum of $2 million.”

The agreement called for a store opening date because the city had to invest a large amount of money in street improvements to handle traffic anticipated with a big store at the southeast corner of Ninth and Oak. News stories at the time put the city’s costs of the $5 million-plus project at about $4.4 million.

The costs covered reconstruction of Oak Street all the way from Ninth to Queen Avenue. Also included: Buying the right of way and extending Oak Street one block north to Pacific Boulevard. The street work was completed last year, and Lowe’s site of about 12 acres was cleared and graded for construction.

If the company goes ahead and builds — a structure of 125,600 square feet plus a garden center of almost 32,000 square feet — it will be noteworthy because it’s a big new store right in the center of a town, rather than on the outskirts as is usually the case. (hh)