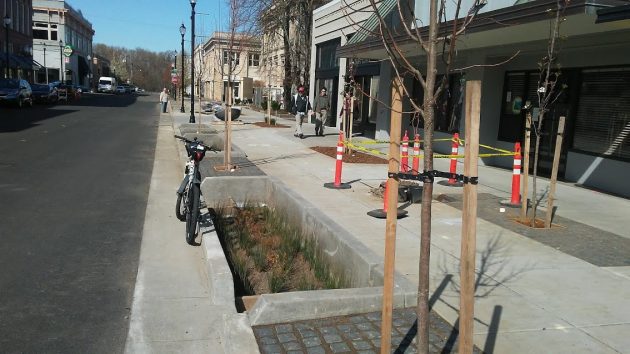 The new section of Broadalbin Street downtown on Monday afternoon.

Getting new “wayfinding” signs for downtown Albany has been a long process now nearing its end. It’s taken about six years, and the bills for having 27 signs designed, made and finally installed will end up totaling around $140,000.

The sign idea originated with a downtown refinement plan by the Portland firm of Crandall Arambula in 2011. Some time later the advisory board of CARA, the Central Albany Revitalization Area, followed up and set aside $75,000 for signs that would draw attention to downtown and help visitors find their way around.

It wasn’t until 2015 that the project took a step forward with a Portland designer’s presentation of what the signs would look like. His contract was for about $15,000. A couple of years later, in September 2017, CARA awarded a $100,209 contract to have 27 signs made.

When it meets at 5:15 Wednesday afternoon (March 21) at City Hall, the CARA board will face a request for an additional $26,605 to cover the likely cost of installing 20 of the items, described as “pedestrian signs.” The city got a quote of $25,338 from Eugene Sign & Awning but is soliciting competing bids as well. The quoted price is based on “prevailing wage rates,” a report to CARA says.

Besides the 20 pedestrian signs, there are seven bigger ones intended to be seen from vehicles. Those are still being made. When they’re ready to be installed, probably by late April, the city will either get quotes for the installation or have city workers do the job.

So, some time soon downtown will no longer have to put up with throngs of tourists walking the streets with questioning looks because they can’t figure out which way to go. (hh)