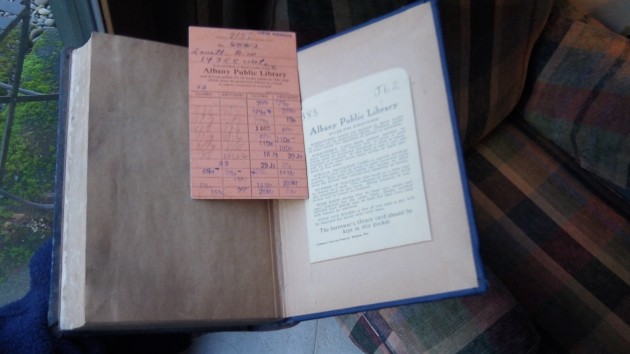 The discovery of a long-overdue library book in an old Albany house has caused ripples of interest across the country, it appears. How the book ended up inside the wall of the 115-year-old house remains a mystery, but at least two people — a lady in Arkansas and another in Texas — did some sleuthing on their own.

The story first appeared here on Feb. 9. The dilapidated house at 1405 Front Ave. N.E., is being reconstructed, and when the sheathing was removed from an inside wall, a worker found a 1907 edition of “American Railroad Transportation,” which had been checked out from the Albany Public Library. The card inside — in perfect condition just like the book — identified the borrower as D.W. Lovett and contained clues, though no proof, that it might have been checked out in 1935.

Albany Democrat-Herald Reporter Jennifer Moody saw the story and expanded on it in the paper a few days later. The Associated Press distributed her account across the country, and it caught the attention of ABCNews.com, whose reporter Katie Kindelan called me for some quotes and ran a story on the network’s website, along with a link to this site, on Monday.

At the break of dawn Tuesday, right after I had left for an early-morning appointment, our phone recorded a message from Heather, who said she was calling from Arkansas and had seen the story on the Internet. She had found some information online that might be helpful in tracking down our book borrower. I haven’t yet had a chance to follow up.

Also on Tuesday morning, in Mobile, Ala., a historian and retired archivist (he had worked at the National Archives and the Carter, Clinton and George H.W. Bush presidential libraries) saw the story and emailed it to his cousin Ginny Young, who lives in Texas, 50 miles north of Houston. He did so because, Ms. Young says, “he knows that I’m intrigued by interesting stories.”

On Tuesday afternoon I heard from Ms. Young, also by email: “I am an avid genealogist and a retired high school librarian — have 30 years of experience in trying to get overdue books returned!”

Far more adept at mining available resources than I, she says she found information about the Lovett family on http://genealogybank.com and http://newspapers.com.

“I was intrigued when I found an article about one of the sons of D.W. Lovett,” she writes. “It seems that Marvin W. Lovett graduated from Albany High School in 1937. He was then employed as yard foreman for the Southern Pacific Railroad in Portland prior to entering military service. If I was a betting woman, I would bet this book was checked out by Marvin for a possible report in school in 1935, and it makes way more sense that a young man would be the one to neglect to return a library book rather than his dad. What do you think? Loved the library book article, by the way.”

What do I think? Well, I don’t know about her theory but I’m impressed by her diligence and resourcefulness and very grateful to her for letting me know what she found. (hh)