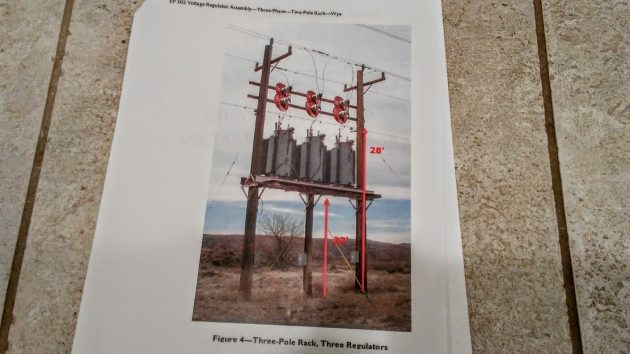 The council was shown this image of a voltage regulator of the kind to be installed off North Albany Road.

Albany Mayor Sharon Konopa called it “one ugly piece of equipment.” It’s a voltage regulator assembly, and Pacific Power plans to install it on city-owned property just north of the park-and-ride station off North Albany Road.

Matthew Ruettgers, development services manager in Albany Public Works, briefed the city council Wednesday on an encroachment permit that will allow the power company to install the bank of three voltage regulators. He said the power company needs the equipment to properly regulate electricity in North Albany and this was the best of the possible locations. Another possibility would have been in the center of the Gibson Hill roundabout.

Konopa didn’t like the looks of it. It’s supposed to be 28 feet high to the top of the reglators, which look like big transformers, and then extend another 6 feet or so to the transmission lines to which they are connnected. (Judging from the height arrows on the image, the equipment shown to the council appears to be not that tall.)

The mayor said property owners within 300 feet should have been notified, the way the city is required to send notifications in land-use matters. Apparently only the people at 820 North Albany Road, next door to the installation, were consulted.

Konopa wondered whether the thing could be camouflaged with tall trees, but Ruettgers considered that unlikely.

Pacific estimates the installation will take place Sept. 16-20, the council was told.

Will the sight of this equipment up in the air bother drivers on North Albany Road? Not if they watch where they’re going and keep their eyes on the vehicle in front. (hh) 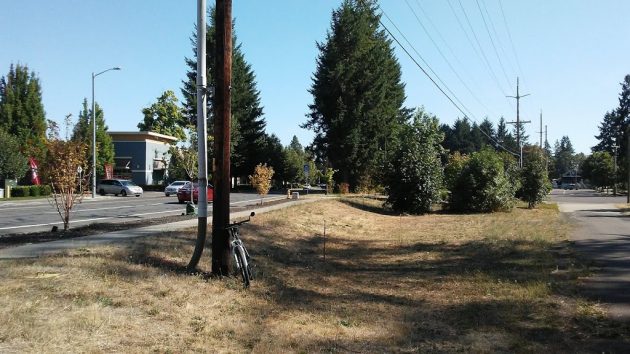 This is where the poles to hold up the regulators will be installed. N. Albany road is on the left.