Looking for a ‘wooden dog’ at Waverly Lake

On Tuesday, another fine day in March, the bike and I found ourselves at Albany’s Waverly Lake, looking for the wooden sculpture of a dog someone had told me about.

The 5-acre pond is flanked by Pacific Boulevard on one side and Salem Avenue on the other, and both highways were surprisingly busy.

This was early in the afternoon, not what you might call the regular rush hour. And yet the traffic hardly ever stopped.

On the video below, the noise is magnified by the peculiarities of my little bike-mounted action camera. If you watch it, turn down the sound.

There’s a nice paved path all around the lake, and walkers were using it. It would have been a bad idea to ride a bike around the lake on that path, so I took the streets instead.

So what about that wooden dog?

Before my little trip around the lake, I got off the bike and walked.  And I found this whimsical creation. Just east of the shack near the boat ramp, there it was. (hh) 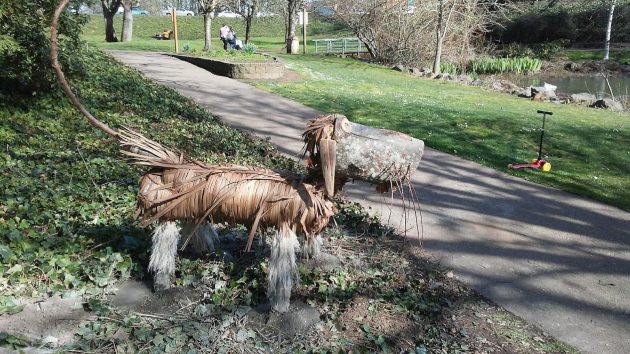 This work of an anonymous artist stands ready to amuse walkers at Waverly Lake.


2 responses to “Looking for a ‘wooden dog’ at Waverly Lake”