Look what’s painted on the street 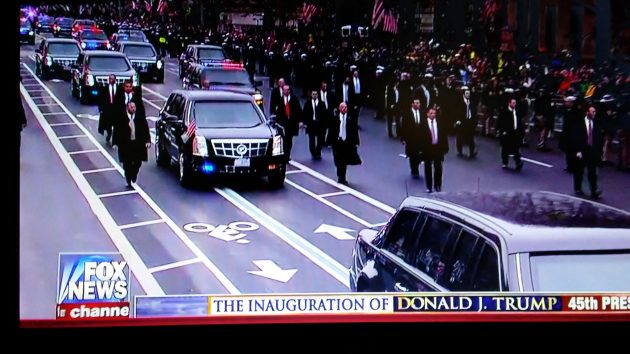 The pavement markings are what caught my eye in this image on TV.

Bike lanes in the middle of Pennsylvania Avenue! In both directions, no less. Albany has no streets wide enough for anything like that, but I was glad  to see that in the nation’s capital, cycling was regarded well enough to try to make it relatively easy and safe on the most prominent street.

Everybody else watching Friday’s TV coverage of the Trump inaugural parade probably thought of other things. But the placement of the bike lanes on Pennsylvania Avenue was what caught my eye.

I have not been to D.C. since the 1980s, a time when newspaper companies still had the money to put on annual meetings for the editors of their local papers. So the two-way bike avenue from the Capitol to the White House was news to me when I saw it on TV.

The bike lanes sandwiched in the median between the six traffic lanes appear to be an addition of recent years. On Google maps, the street view shows them in 2011, but not before. Google also shows the lanes in use. Take a look: 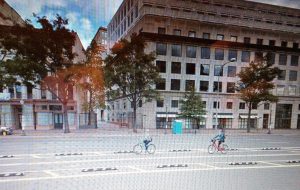 Judging by the parade coverage, those low bumpers to discourage passing cars from intruding on the bike lanes have been removed. But they seem to provide bike riders some protection. Maybe that’s an item than can be considered if Benton County eventually decides to complete a bike route along — instead of separate from — the Albany-Corvallis Highway. (hh)

14 responses to “Look what’s painted on the street”