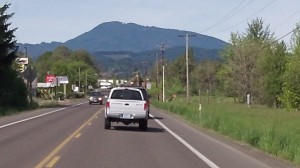 Marys Peak, seen from the road heading to Philomath.

If you looked really hard at the top of Marys Peak this past weekend, you could still see a little patch of white. At 4,100 feet it’s the highest mountain in the Coast Range, and the extent of snow up there has taken on some significance as an indicator of the local effects of global warming, or the lack of it.

In 2011, climate scientist Phil Mote of Oregon State University was quoted on the subject in an article in a publication called EarthSky. The gist was that it used to be fairly common for Marys Peak to still have snow on April 1 but then, by the 1980s, this had become much less common. And that seemed to be a sign that climate change, or global warming, was gradually diminishing the winter snowpack in Pacific Northwest hills.

Now it looks like there’s still a little snow on Marys Peak not just on April 1 but almost a whole month later. Skeptics who challenge the conventional wisdom on the extent of gradual climate change and its causes like to point to Marys Peak as another sign that they are not completely wet. If there’s still snow on that relatively low peak well after the beginning of spring, they say, perhaps our climate is not changing in disastrous ways just yet.

What happens on one little Benton County peak year after year probably is not a sign of anything lasting or big, but it’s hard not to be encouraged by that little speck of white. (hh)