Long road to a sidewalk 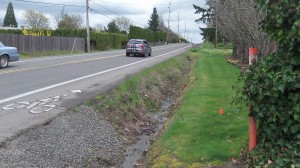 The sidewalk would go to the right of the ditch.

Nearly six years ago, in 2007, some parents in North Albany urged that the city build sidewalks on Gibson Hill Road so that children, when walking down to North Albany elementary and middle schools, would be safely away from fast-moving traffic. City engineers started working on the idea. They applied for grant money. In February 2012, ODOT agreed to give the city $1.2 million from federal transportation funds. The city council accepted the grant in July.

Now, a year later, where’s the sidewalk? At last report, staffers in Public Works said that it had yet to be designed by someone picked by ODOT, and no design consultant had yet been chosen. Last year, city officials said the project could be built in 2013. But since it hasn’t yet been designed, chances are it won’t be built till 2014 — assuming the grant is not pulled back.

The city had warned last year that the project would be complicated, and cost more than necessary, because of federal requirements. And this is a mere sidewalk —  two, actually, one on each side for nearly a mile from the top of Gibson Hill to Scenic Drive. If we grant for argument’s sake that there’s some federal obligation to pay for local sidewalks, a dubious proposition, then the government should at least get these projects done quickly and at the lowest possible cost. (hh)