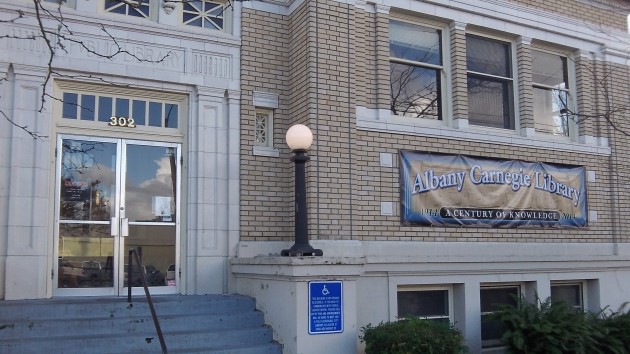 Of all the things a city government must do, maintaining public parks and libraries ranks at the very top of the priority list, as far as I’m concerned. And today, a particular library has the spotlight here.

It’s Albany’s downtown Carnegie Library on Ferry Street, which was dedicated in 1914 and this year is celebrating a century of continuous service to people who read and children who want to learn.

And what a service it is! Nothing overcomes the fate of being stuck in one place as much as reading about the world, in fiction as well as fact. And the public library makes this possible at small or no additional cost to the individual reader.

The Carnegie Library is not the biggest or the busiest around. The main library on 14th Avenue is vastly bigger and busier. But the downtown branch is especially appealing because of its intimate size, historic feel, and close proximity to thousands of people in west, central and north Albany. Not to mention the old radiators that keep the interior cozy on cold winter days. And with nearly 23,000 titles, it has enough material and a varied enough selection that even regular customers will never run out of something to read.

In budget discussions over the years, I’ve heard members of the city council and others say that nothing is as important as providing for public safety. By this they mean that they will always want to fund law enforcement first even at the cost of other services. That is too narrow a view. A town without decent libraries — or parks for that matter — would be just as unlivable as a town with too much crime.

Fans of libraries have an occasion now to recognize the existence of the Carnegie branch. The city has just announced that from 2 to 7 p.m. on Sunday, Dec. 14, the branch will be open for tours. (This will be in conjunction with the annual Christmas tour of historic homes, but you won’t need a ticket for the whole tour to visit just the library.)

The Carnegie is listed as a landmark in the Monteith Historic District. Unlike some landmarks, this one is a working and crucial part of the life of this small town. Long may it remain. (hh)

8 responses to “Long live this library!”