Logs leaving for Asia (I think)

On Friday, a fine spring day, I thought I’d check on Albany’s Talking Waters Garden, and where these wetlands adjoin the Millersburg rail yard, I saw this train loaded with logs.

In 2014, log exports from the West Coast, not just from Oregon, dropped 13 percent from the year before, largely because of less demand from China, the Forest Service’s research station in Portland reported last month. Still, West Coast log exports were a big item: 1,706 million board feet worth around $1,310  million.

As I say on the video, I think it would help Oregon’s economy if those logs could be processed in the state rather than being shipped overseas. That’s just my opinion, though, and it is debatable. A 2013 report to the legislature said the situation is complicated, and reduced exports would not necessarily translate into more Oregon jobs.

The softwood logs riding north on the Portland & Western Railroad are from private lands. Logs from federal forests cannot be exported, and in any case relatively few have been harvested in federal forests in the last 30 years or so. 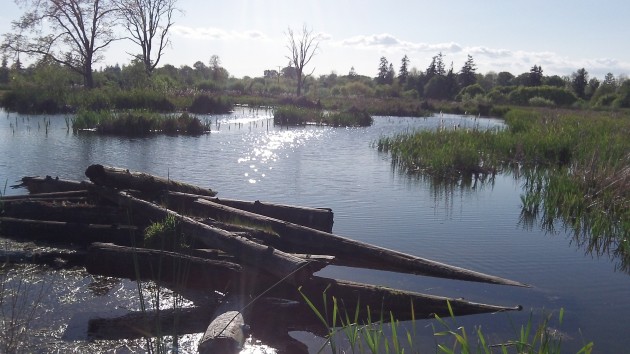 As for the Talking Waters Garden, that was the name originally. Now it’s usually transformed to Talking Water Gardens. Neither one fits, exactly. A garden is one thing that the place is definitely not. Which makes me think: It’s about time the city of Albany prepare a report on how this project has worked out.

It had two goals: Help reduce the late-summer temperature in the Willamette River and absorb certain industrial residues from the already treated wastewater being pumped through it. The city council might want to ask Public Works for some numbers to show how things have been working out. (hh)


3 responses to “Logs leaving for Asia (I think)”