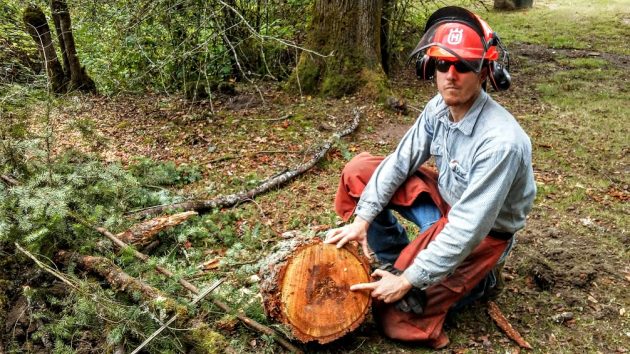 Adam Stebbins points out the fungus inside a Douglas fir felled at North Albany County Park.

Even though some of the trees felled at North Albany County Park looked healthy, they weren’t. I learned this when I visited today with Adam Stebbins, Benton County’s natural resources coordinator.

Stebbins was leading the cleanup after last week’s logging. Men and women in a Linn County work crew were feeding branches into chippers. Stebbins said without the help of the Linn County sheriff and the Albany Parks Deparment the work would take weeks. As it is, it should be finished Thursday, with the grinding of stumps.

Fifty-five Douglas firs in the park were cut down as “hazard trees,” weakened to the point they might break and fall. The logging prompted complaints from neighbors that it also took down healthy trees, but Stebbins says the trees were not in good shape. With previous experience in other forestry jobs, he’s worked for the county in forestry management for 10 years.

The firs were planted more than 50 years ago in what was a Christmas tree farm before it became a county park. With the soil conditions there, Douglas firs have a life expectancy of 35 years. Summertime heat and drought plus too much moisture in the winters added to the stress on these trees.

While some still had plenty of greenery, they also showed needle die-off, and on some the crowns had begun to wither, a sure sign on a Douglas fir that the tree is doomed. Some of the stumps showed black areas, which Stebbins described as a fungus, an infection that rots the trunk from within.

Benton County paid a contractor, Timber Services of Philomath, about $24,000 to fell the trees and haul the logs to mills in Philomath and Eugene. Revenue from the sale amounted to about $10,000.

The county will plant Willamette Valley pines, better suited to conditions, to replace the firs. (hh) 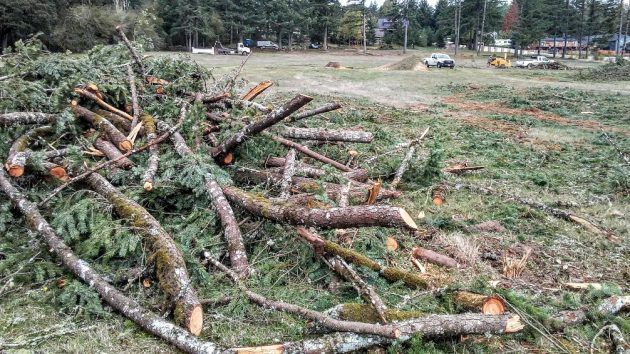 A pile of Douglas fir branches ready for the chipper at North Albany County Park today.

6 responses to “Logged park trees were in poor shape”