Little libraries: Long may they last 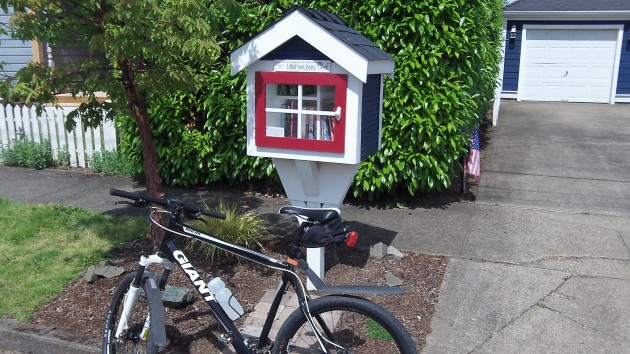 On Ninth: No problem for a guy on a bike to read the titles and borrow a book.

So if I wanted to sample the books in this Little Free Library, I could do so without even getting off the bike. Perfect! And because of the thoughtful placement of pavers, pedestrians could do so too without getting bark dust on their shoes. Looks like great spot, and I’m glad no regulations have gotten in the way.

Around Oregon and indeed the world, those little free libraries have been popping up like mushrooms after a warm rain. Scores of these impromptu public book shelves exist in the Willamette Valley alone. They even have a national organization that issues charters (www.littlefreelibraries.org), though no one needs anything official to set one up. It helps to have carpentry skills, though, and of course a small supply of gently used books to make a start.

Back on Feb. 14 I ran a story about a little street library on Grandview Drive in North Albany. Last week I came across another one, in the 1100 block of Ninth Avenue S.W. Then I saw an article in The Atlantic. It appeared in February 2015 under the title, “The Danger of Being Neighborly Without a Permit.” It seems that in few places around the country (Shreveport, La., and Los Angeles were mentioned by name), bureaucrats got in the way at least temporarily. They were talking permits and zoning rules, that sort of thing.

I asked Albany’s planning manager, Bob Richardson, if the city had any problem with these things. “These little libraries probably should not be put in public rights-of-way without first obtaining a permit,” he responded. (Oops!)

But that sounds more rigid than it probably is. Richardson went on: “In general, the city doesn’t regulate them if they are on private property. Ideally anyone installing one would locate underground utilities before digging or setting a post; they should not intrude in the public right-of-way and obstruct sidewalks, and should be placed to avoid obstructing vision of streets, sidewalks, and driveways. As long as they don’t create safety issues, we would tend to look at them like a fence post, or lawn ornament.”

Sounds pretty much like a sensible, live-and-let-live approach. Like, if they don’t cause any problem we won’t get in their way. Now, find one these neighborhood gems, check out a book, and leave one in return. (hh) 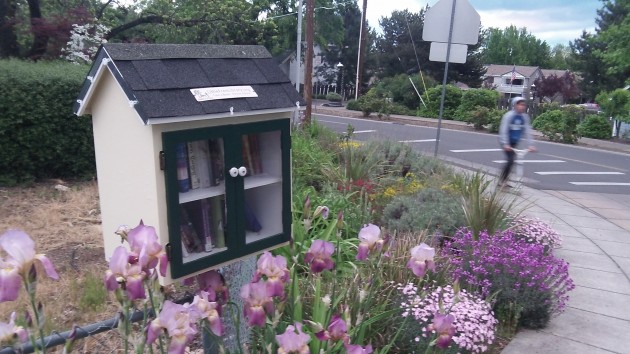 This one has been operating in Jacksonville, Ore., for some time.


2 responses to “Little libraries: Long may they last”